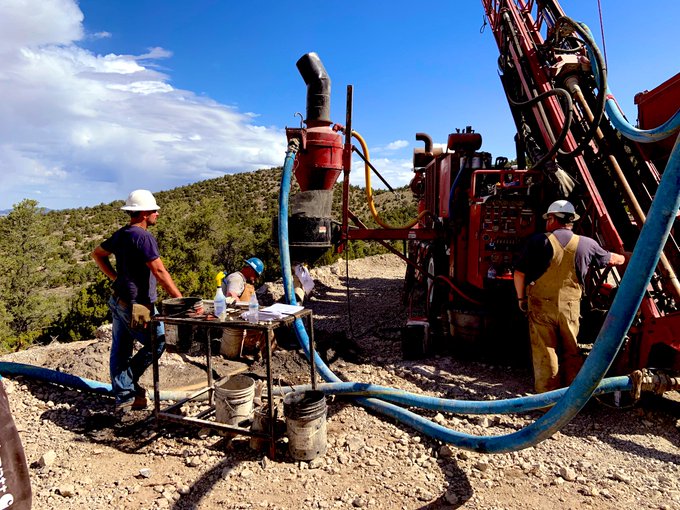 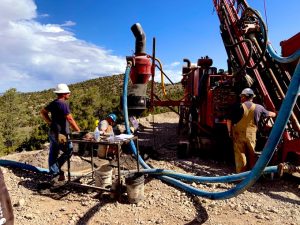 Drilling at Selena Credit: Ridgeline[/caption] The second phase of the scout drilling program at Ridgeline Minerals’ wholly owned, 26-sq.-km Selena project in Nevada, 64 km north of Ely, hit shallow oxide gold-silver mineralization at the Chinchilla and Juniper targets. The company has released assay results for 10 reverse-circulation drill holes. The drill highlights include 29 metres of 0.38 g/t gold and 65.28 g/t silver (1.26 g/t gold-equivalent) starting at 126.5 metres in hole SE20-014; 9.1 metres of 0.36 g/t gold and 78.28 g/t silver (1.42 g/t gold-equivalent) from 118.9 metres in hole SE20-013; and 21.3 metres of 0.3 g/t gold and 15.58 g/t silver (0.51 g/t gold-equivalent) from 91.4 metres in hole SE20-006. “Our 2020 drilling campaign represents the first new drillholes at Selena in decades with results to date indicating we are in the early stages of an emerging shallow oxide, gold-silver discovery,” Mike Harp, Ridgeline’s VP of exploration, said in a release. Harp added that the company remains encouraged by the widespread mineralization from the second-phase drill program and that, as its understanding of the geologic model at Selena has evolved, Ridgeline has hit “progressively wider and higher-grade mineralized intercepts.” A third-phase, 1,500-metre drill program is now scheduled for October, to follow up on the latest intercepts and test additional fault zones between Chinchilla and Juniper, which are coincident with gold-silver and Carlin-type pathfinder soil anomalies. According to Ridgeline, holes SE20-013 and SE20-014 hit some of the strongest mineralized intercepts to date from Selena and were the first holes to directly intersect the Juniper fault zone, which forms part of a corridor connecting the two targets tested. The third-phase program will target gold-silver mineralization at the intersection of fault zones interpreted as the feeder zones for the Selena mineralizing system. Cyanide shake tests completed on drill assays of over 0.2 g/t gold suggest average cyanide solubilities of 81% and 74% for gold and silver, respectively. The initial results suggest that the Selena mineralization may be suitable for heap-leach processing. In addition to Selena, Ridgeline wholly owns the 39-sq.-km Carlin East and 51-sq.-km Swift projects in Nevada. For more information, visit www.RidgelineMinerals.com.