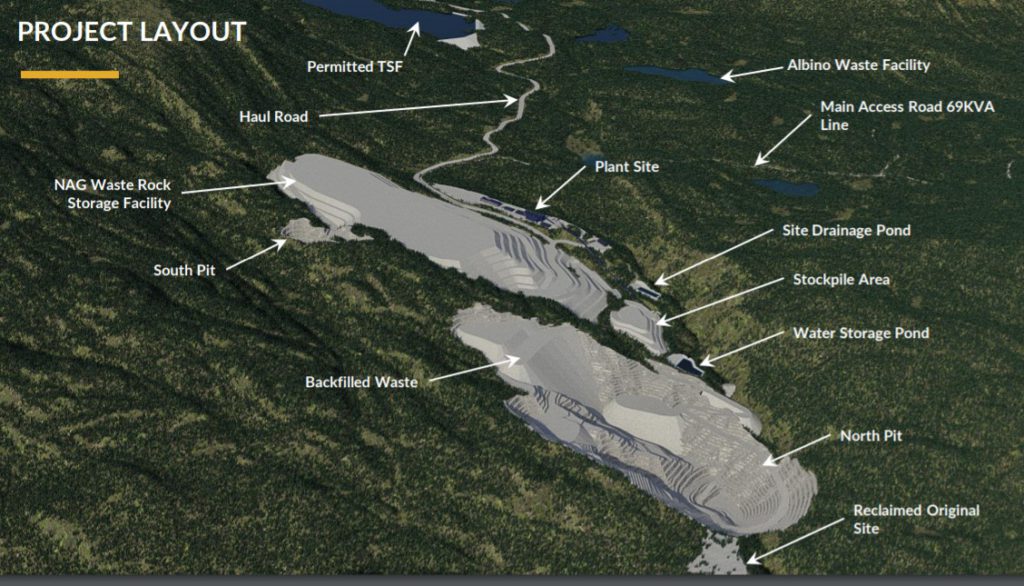 Proposed layout for the Eskay Creek open pit as per the 2021 PFS. Credit: Skeena Resources.

Skeena Resources (TSX: SKE: OTC: SKREF) has released the preliminary feasibility report for its 100%-owned Eskay Creek gold project with an after-tax net present value of $1.4 billion and internal rate of return of 56%. The payback period is estimated at 1.4 years. A gold price of US$1,550 per oz. and silver price of US$22 per oz. were used.

The project encompasses a former producing mine north of Stewart in British Columbia’s Golden Triangle.

Pre-production capital expenditures are estimated at $488 million, followed by sustaining capital of $47 million and reclamation costs of $92 million.

The PFS covers a high grade conventional truck and shovel open pit. Proven and probable reserves are 26.4 million tonnes with a diluted grade of 3.37 g/t gold and 94 g/t silver. The mine is designed to provide 2.9 million tonnes of ore per year to the mill in the first four years and 2.7 million tonnes annually for the remainder of the mine life which will total 9.8 years. A 7,045 t/d million with gravity and flotation capabilities will produce a saleable precious metals concentrate.

The prefeasibility study is available at www.skeenaresources.com.