SASKATCHEWAN – NexGen Energy of Vancouver is planning a 35,000-metre winter drill program at its Rook 1 uranium project on the southwest […]
By Marilyn Scales January 23, 2017 At 4:34 pm 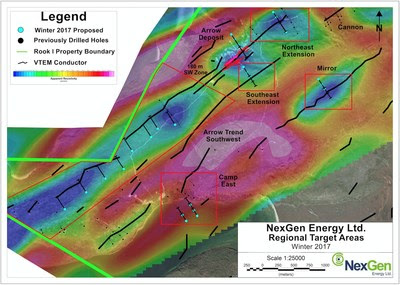 SASKATCHEWAN – NexGen Energy of Vancouver is planning a 35,000-metre winter drill program at its Rook 1 uranium project on the southwest edge of the Athabasca Basin. Seven drills – four at the Arrow deposit and three at other targets – will be operating by the end of the month. A fifth rig will later be added those at Arrow. NexGen has three primary objectives. First, it wants to grow the Arrow deposit using step-out drilling from known mineralization, including untested portions of all the shear zones associated with the deposit. Second, the company will continue infill drilling at Arrow on a 25 x 25-metre grid. Third, high priority regional targets close to Arrow will be drilled, including potential new shear zones northwest and southeast of Arrow. The Rook 1 camp is expanding as work on environmental and engineering studies are planned as well as drilling. More information about Rook 1 and the Arrow deposit is available at www.NexGenEnergy.com. [caption id="attachment_1003716858" align="aligncenter" width="300"]