SASKATCHEWAN – NexGen Energy of Vancouver continues to drill with success at the Arrow zone at its Rook I property adjacent to […]
By Marilyn Scales February 2, 2016 At 4:27 pm 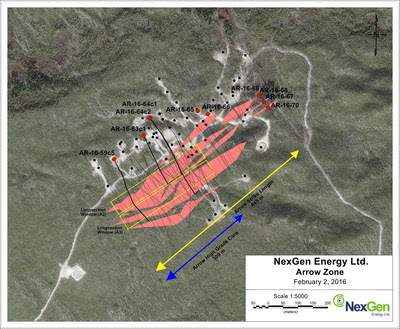 SASKATCHEWAN – NexGen Energy of Vancouver continues to drill with success at the Arrow zone at its Rook I property adjacent to the Patterson Lake South property in the Athabasca Basin. The first four holes of its 30,000-metre winter drilling program intersected visible uranium mineralization and off-scale radioactivity. [caption id="attachment_1003713427" align="alignleft" width="300"] Arrow zone drill hole locations.[/caption] Of particular interest is hole AR-16-64c2 that cut very dense massive pitchblende within the high grade A2 sub-zone. NexGen says that near continuous, off-scale radioactivity was measured over a 27.2-metre section. The hole also had a 5.5-metre section that tested >61,000 cps, the highest ever drilled at Arrow. The sub-zone is open in all directions. The Arrow zone is land based and basement hosted over an area of 645 by 235 metres with mineralization beginning 100 metres below surface and extending at to 920 metres. The Arrow zone, too, remains open in all directions. NexGen says this winter’s drill program will reach 30,000 metres, and there are six rigs active at the Rook I property. The release of the maiden 43-101 estimate for the Arrow zone is expected by mid-2016. Please visit NexGenEnergy.ca for more information.