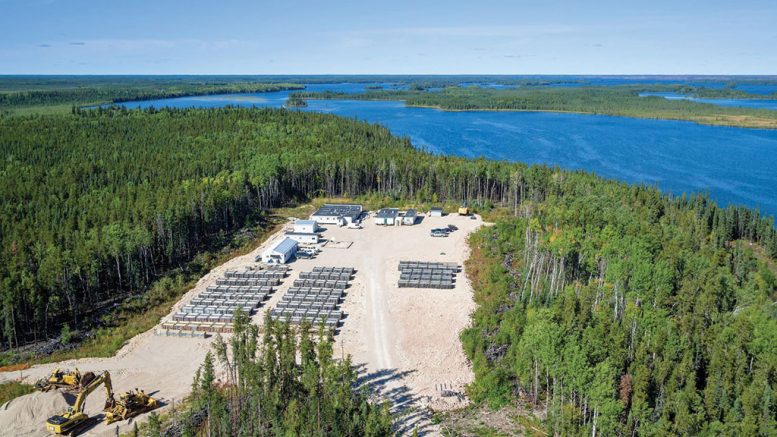 Camp at McIlvenna Bay Credit: Foran[/caption] SASKATCHEWAN – A pre-feasibility study (PFS) released by Foran Mining for its wholly owned McIlvenna Bay project suggests a 3,600 t/d underground mine with on-site processing and tailings storage and the shipping of copper and zinc concentrates to offsite smelters. With a 9-year mine life, average annual production of 89.2 million lb. of zinc and 27.9 million lb. of copper and $261 million in pre-production capital, the net present value estimate for the project, at a 7.5% discount rate, comes in at $147 million with a 19.2% internal rate of return. “We are proposing a modern underground mine supported by surface infrastructure designed to take into account feedback we have received from local communities,” Patrick Soares, the company’s president and CEO, said in a release. “We are now in a position to advance discussions with potential investors with experience developing similar mines as we explore the best way to credibly and safely build and operate McIlvenna Bay.” Foran was previously planning to complete a feasibility study on the project by year-end incorporating off-site toll processing at Hudbay’s 777 complex in Flin Flon. After reviewing the economics of toll milling and costs of tailings storage, the company decided to table a pre-feasibility level document with on-site processing. The proposed 3,600 t/d underground mine would feature ramp access, electric haul trucks and a vertical conveyor to bring ore from deeper levels to surface, producing zinc and copper concentrates on-site. Half of the tailings generated would be used as paste backfill with the remainder trucked to a dry-stack tailings storage facility. On-site operating costs, including sustaining capital, are forecast at $99.34 per tonne. The zinc concentrate would grade 54.7% zinc whereas the copper product would come in at 26.8% copper. Total recoveries for the two metals are expected at 80% and 88.2% respectively. These would be shipped to offsite zinc and copper smelters. The probable reserve statement for the project is at 11.3 million tonnes grading 4.01% zinc, 1.14% copper, 0.54 g/t gold and 20.97 g/t silver. These are within unchanged indicated resources of 22.95 million tonnes at 3.05% zinc, 1.17% copper, 0.44 g/t gold and 16.68 g/t silver. Additional inferred resources are at 11.2 million tonnes grading 1.83% zinc, 1.38% copper, 0.47 g/t gold and 14.81 g/t silver. McIlvenna Bay is a zinc, copper, lead, gold and silver volcanogenic massive sulphide deposit; the majority of current resources are within two lenses, with an average combined thickness of 17.6 metres and over 2,000 metres of plunge from surface. The deposit remains open. Foran sees further upside from conversion of the existing resource as well as from resource expansion, both near-mine and within its larger 204 sq. km property. The company now plans to move the project to the feasibility stage and will engage in discussions with potential development partners. Additional studies are planned on the design of the processing and tailings facilities alongside mine plan optimizations. For more information, visit www.ForanMining.com.