VANCOVER – Last year, Trevali Mining beat its operating guidance: production of 417 million lb. of payable zinc came in ahead of […]
By Magda Gardner January 21, 2020 At 12:28 pm 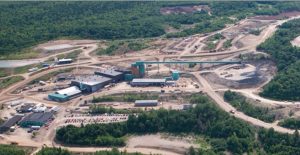 The Caribou zinc mine in New Brunswick. Credit: Trevali Mining The Caribou zinc mine in New Brunswick. Credit: Trevali Mining[/caption] VANCOVER – Last year, Trevali Mining beat its operating guidance: production of 417 million lb. of payable zinc came in ahead of earlier forecasts of 361 million lb. to 401 million lb. In addition, the 50.3 million lb. of lead and 1.5 million oz. of silver generated last year also came in slightly ahead of guidance. “In 2019, we started the transformation of Trevali. The company meaningfully beat annual production guidance, the board was refreshed, a new senior management team was assembled, and we launched the T90 program to modernize our operations and bring them down the cost curve,” Ricus Grimbeek, the company’s president and CEO said in a release. This year, the company expects to further grow its output: it forecasts 380 million lb. to 410 million lb. of zinc production, in addition to 51 million lb. to 57 million lb. of lead and 1.4 million oz. to 1.6 million oz. of silver. All-in sustaining costs are forecast at US$0.98 to US$1.08 per lb. of zinc produced which is in line with the latest guidance for last year. The increase in zinc production, Trevali’s primary product, appears to be driven by the Caribou and Santander underground mines; Caribou is in New Brunswick while Santander lies in Peru. In 2020, the Perkoa mine in Burkina Faso is expected to remain the major zinc contributor, with 150 million lb. to 160 million lb. of the metal expected from this asset. Last year, the company launched the T90 business improvement program which is aimed at finding US$50 million in annual efficiencies to reduce the company’s all-in sustaining costs to US$0.90 per lb. of zinc by 2022. At year-end, Trevali identified US$42 million in efficiencies and had implemented US$14 million in savings. In the first quarter, Trevali plans to release a pre-feasibility study to support an investment decision on an expansion at the Rosh Pinah operation in Namibia – a full feasibility is expected in the fourth quarter. The company also expects to complete an internal preliminary economic assessment on the Santander pipe and its inclusion into existing operations by the end of this year. For more information, visit www.Trevali.com.