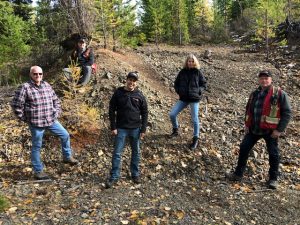 Kodiak Copper has released complete assay results for hole MPD-20-004 (after reporting partial assays in September) and new assays for drillhole MPD-20-002, which were completed at the Gate zone within its wholly owned MPD project. These latest intercepts indicate a “large zoned and significantly enriched copper-gold envelope at Gate,” which would be typical for porphyry-hosted mineralization.

In the release, Claudia Tornquist, Kodiak’s president and CEO, noted that the 282-metre higher-grade intercept within MPD-20-004 is “one of the most impressive copper-gold intercepts reported from a porphyry project in southern B.C.” She also added that the latest results “confirm that this high-grade zone is not unique, but part of a wider mineralized envelope intersected over 535 metres in MPD-20-004 and 642 metres in MPD-20-002.”

Additional assays from the Gate zone are pending and, with ongoing drilling, the company expects the news flow to continue into next year.

The drilling has been focused on the northern portion of a 1-km long gold-in-soil anomaly overlying last year’s Gate zone porphyry discovery.

Results from the Gate zone to date suggest a zone of copper-gold mineralization that is at least 300 metres wide and extends down to a depth of 800 vertical metres, and remains open.

Kodiak’s wholly owned, road-accessible MPD project in B.C. is 40 km south of Merritt. Last month, Teck Resources invested $10.5 million into the junior, through a private placement, for a 9.9% stake in the copper-focused explorer.