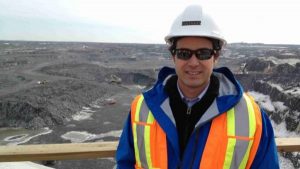 Jose Vizquerra at the Canadian Malartic gold mine in Quebec in 2013 Credit: J. Vizquerra

Drilling at O3 Mining’s Malartic property in Val d’Or hit near-surface extensions of the Kierens gold deposit, outside of the proposed pit outlines defined in a September preliminary economic assessment.

The company has released assay results for four drillholes, all of which hit the Kierens-Norlartic zone at shallow depths and suggest that the Kierens deposit comes closer to surface than expected.

According to Jose Vizquerra, O3’s president and CEO, these latest drillholes could potentially positively impact a future mining scenario at Malartic.

“We are pleased with these latest drill results as they show that drilling can continue to expand the mineral footprint at the various deposits on our Malartic property, which bodes well for growing the resource base and making the Marban project development even more attractive. We also received the pleasant surprise of intercepting mineralization just below the surface, which could have a meaningful positive impact in a future production scenario,” Vizquerra said in a release.

In its 2020-2021, 150,000-metre drill program, the junior is planning to complete 45,000 metres at Malartic, to test for extensions of existing deposits and test zones outside of the planned pit areas.

O3 is part of the Osisko Group and also holds mineral assets in Ontario, as well as in the James Bay and Chibougamau areas of Quebec.