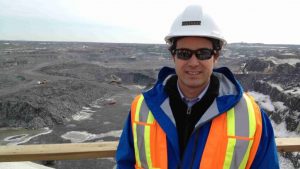 Jose Vizquerra at the Canadian Malartic gold mine in Quebec in 2013 Credit: J. Vizquerra

O3 Mining has released the results of a preliminary economic assessment (PEA) on its wholly owned Marban project, which suggests potential for this asset to “become a highly profitable gold mine in one of the most prolific producing regions in Canada,” according to Jose Vizquerra, the company’s president and CEO.

The early-stage study defined a 15-year, 11,000 t/d open pit operation, mining the Marban, Norlartic, Kierens, North-North and Gold Hawk deposits. Mining would take place over 13 years, with an additional two years of low-grade stockpile processing at the mill. The process plant design is based on standard carbon-in-leach (CIL) technology with gravity concentration.

The resulting operation would produce an average of 115,000 gold oz. annually, peaking at 161,000 oz. in the ninth year. Based on an initial capital cost estimate of $256 million, and all-in sustaining costs pegged at US$822 per oz., the after-tax net present value estimate for the project comes in at $423 million, at a 5% discount rate and a long-term gold price of US$1,450 per oz., with a 25.2% internal rate of return.

In the release, Vizquerra also highlighted the geological prospectivity of Marban.

“The Marban geological team has demonstrated the ability to identify an abundance of resources over a very short period. The ongoing drill program will continue to add to and upgrade resources as we seek to move the project forward towards production.”

Total resources across Marban, based on an estimate from August of this year, total 54.2 million tonnes in the measured and indicated category, at 1.1 g/t gold, for a total of 1.9 million contained ounces. A further 13.2 million inferred tonnes, at 1.44 g/t gold, host an additional 610,827 gold oz. The majority of these resources are pit-constrained (with a smaller underground component); the inventory is derived using cut-off grades between 0.3 g/t gold and 3.5 g/t gold.

All of the deposits scheduled in the PEA show potential for resource growth, with meaningful historical intercepts outside of their current boundaries.

The Marban project lies within the 125-sq.-km Malartic property in Quebec’s Abitibi gold district and is 12 km from the Canadian Malartic gold mine, jointly owned by Agnico Eagle and Yamana Gold. The grounds also lie along the shear structure host to Wesdome’s Kiena deposit.

The Marbenite and Norbenite shear zones at Malartic host additional zones of mineralization; Malartic also covers an 8-km stretch of the Camflo horizon, associated with a high-grade past-producing mine.

Later this year, O3 plans to start a 40,000-metre drill program at Malartic, to test extensions of the existing deposits and drill new targets, as well as to upgrade resources.

With the PEA completed, the company is now looking to start a prefeasibility and environmental impact studies to advance the project.

“O3 Mining is ready to maximize Marban’s value by advancing the studies to further refine and de-risk the project, which the Osisko Group has successfully done with other deposits in the past, such as Canadian Malartic,” Vizquerra added.