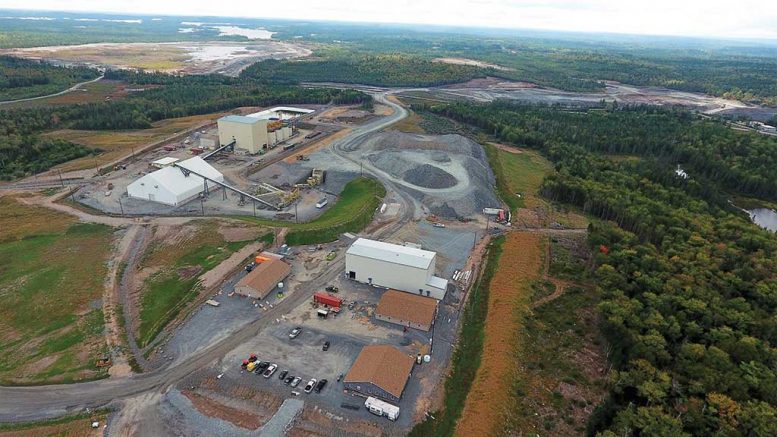 An aerial view of the Touquoy processing facilities at Atlantic Gold’s Moose River Consolidated gold project in Nova Scotia. Credit: Atlantic Gold.[/caption] St Barbara’s offer represents a 41.1% premium to Atlantic’s closing share price on May 14 and a 40.8% premium to the company’s 30-day volume weighted average price. The offer consists of $2.90 per share in cash plus a spin-out company that will hold Atlantic’s interest in Velocity Minerals (TSXV: VLC) valued at 5¢ per share for a total consideration of C$2.95 per share. Velocity is advancing its Rozino gold project in Bulgaria. The C$2.90 per share cash consideration implies a total equity value for Atlantic of C$722 million and a total enterprise value of C$802 million. In a brief conference call, Atlantic’s chairman and CEO Steven Dean, said the deal was a “great transaction for all Atlantic shareholders,” and particularly so for those who had been with the company from the very start, for whom it “represented a very substantial return to their initial investment.” “I understand that the questions are short because it’s not too difficult to explain $2.90 in cash,” he said when there were only a few queries were posed during the question and answer session of the call. “Cash is cash and that’s a relatively rare thing in our mining space these days and we’re very proud to have been able to deliver that to shareholders.” The deal is another sign of what appears to be a growing appetite in Australia for North American assets. In March, Newcrest Mining (ASX: NCM) acquired a 70% stake in Imperial Metals’ (TSX: III) Red Chris mine in British Columbia. Atlantic put the first phase of its Moose River Consolidated (MRC) mining complex in Nova Scotia into commercial production on March 1, 2018. Phase One of the complex involves the mining of two open-pit gold deposits, Tourquoy and Beaver Dam. Last year, Tourquoy produced 90,531 oz. gold — surpassing the company’s 2018 guidance of 82,000 to 90,000 ounces. Those ounces were produced at cash costs of C$558 per oz. and all-in sustaining costs (AISCs) of C$731 per ounce. Atlantic expects Tourquoy will produce between 92,000 and 98,000 oz. gold in 2019 at cash costs of $560 to $610 and AISCs of C$695 to $755 per ounce. The company expects to receive a mining permit for Beaver Dam in less than a year. In addition to Tourquoy and Beaver Dam, Atlantic has several other deposits and exploration projects on its land package that it expects to eventually fold into an extended mine plan based around a central processing facility at Tourquoy. The Cochrane Hill deposit is 80 km from the central mill and the Fifteen Mile Stream deposit is 57 km from the mill. Both deposits are accessible by highway. As for the spinco, Dean says, it will be an entity that principally owns Atlantic’s investment in Velocity and will be listed on the Toronto Venture Exchange. Atlantic invested $9 million for a 39.2% (partially diluted) strategic stake in Velocity Minerals in January. A preliminary economic assessment of Velocity’s flagship asset, Rozino, in September 2018, outlines the potential for multiple open pit deposits that would share a central mill, with a life-of-mine grade of 1.51 grams gold per tonne, a low strip ratio, and AISCs of US$550-650 per ounce. At the time of the investment, Dean referred to Atlantic’s stake in Velocity as a “strategic partnership” and said he looked forward to “the shared objective of advancing its Bulgarian exploration assets through to feasibility stage and beyond.” St Barbara’s friendly offer is expected to close in July and contains a C$25 million break fee. In a research note on Australia-Canada M&A, BMO Capital Markets analyst Brian Quast notes that “the valuation gap between Australian and Canadian producers creates an environment ripe for consolidation.” “Australian producers currently hold the upper hand in valuation, free cash flow generation, and market cache to purchase Canadian assets, many of which have struggled mightily of late,” he continued. “As such, we view the consolidation of Australian and Canadian mid-tier miners as being inevitable.” Quast noted that Australian gold producers “have several options to expand in Canada in transactions that would be accretive to shareholders on the basis of net asset value and/or cash flow,” and speculated potential acquirees could include New Gold (TSX: NGD); Pretium Resources (NYSE: PVG); TMAC Resources (TSX: TMR) and Wesdome Gold Mines (TSX: WDO). This story originally appeared on www.northernminer.com.