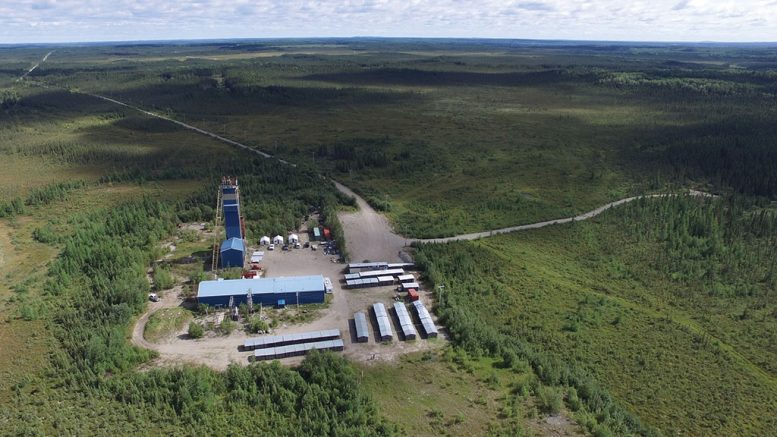 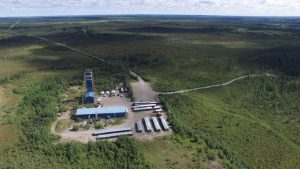 Douay gold project Credit: Maple Gold[/caption] Agnico Eagle Mines is investing $6.2 million into Maple Gold as the two companies announced they've signed an agreement to consolidate two adjacent land packages in Quebec into a 50-50 joint venture. The agreement, a binding term sheet, will combine Maple’s 357-sq.-km Douay gold project in northern Quebec with Agnico’s adjacent 39-sq.-km past-producing Joutel project into a consolidated property package covering approximately 400 sq. km. The term sheet envisions a 50-50 joint venture, with Agnico and Maple agreeing to negotiate towards and enter into a definitive joint venture agreement within three months. The current agreement calls for Agnico to fund $18 million in exploration expenses over four years and for the two companies to jointly fund an additional $500,000 of exploration work on volcanogenic massive sulphide (VMS) targets in the western portion of the Douay project. Each party would also receive a 2% net smelter return (NSR) royalty on the property that they contribute to the JV, which could be bought back for US$40 million each. According to Maple’s release, “the strategic partnership brings together two groups with a common focus on exploration, discovery and development in the Abitibi greenstone belt.” The two groups plan to explore the grounds and expand areas of known mineralization. Agnico has agreed to support Maple in pursuing third-party financing for Maple’s share of the development phase of the JV. “The strategic partnership with Agnico marks a transformational milestone for Maple Gold and supports the opportunity in front of us,” Matthew Hornor, Maple Gold’s president and CEO, said in a release. “Their involvement along with the Joutel contribution will create a highly prospective land package that has the potential to form an exciting new gold district in Quebec’s Abitibi gold belt.” Hornor added that with this investment, Maple will have over $12 million in cash, which “when combined with the $18 million in JV funding, results in a strong capital position to be directed at exploration, development and new corporate growth opportunities.” Agnico's $6.2-million investment in Maple, a 25.8-million unit non-brokered private placement, is expected to give the gold producer a 12.84% stake in the junior on a non-diluted basis, up from 4.4% currently. Each unit is made up of one share and one warrant, with closing of the financing expected around Oct. 9. The two Toronto-based companies have also agreed to enter into an investors' rights agreement upon closing of the financing, which gives Agnico rights to participate in equity financings to maintain its pro-rata ownership in Maple, or to acquire up to a 19.9% stake in the junior, and the right to nominate one or two members to Maple’s board, depending on the size of the board. Last year, Maple released an updated resource for Douay with total pit-constrained indicated resources of 8.6 million tonnes grading 1.52 g/t gold for a total of 422,000 oz. and a further 65.8 million inferred tonnes at 0.97 g/t gold totalling 2 million pit-constrained oz. The underground component includes 5.4 million inferred tonnes grading 1.75 g/t gold for a total of 307,000 oz. Joutel closed down in 1992, after pouring its millionth ounce of gold in 1990. Both Douay and Joutel host multiple mineralization styles. For more information, visit www.AgnicoEagle.com or www.MapleGoldMines.com.