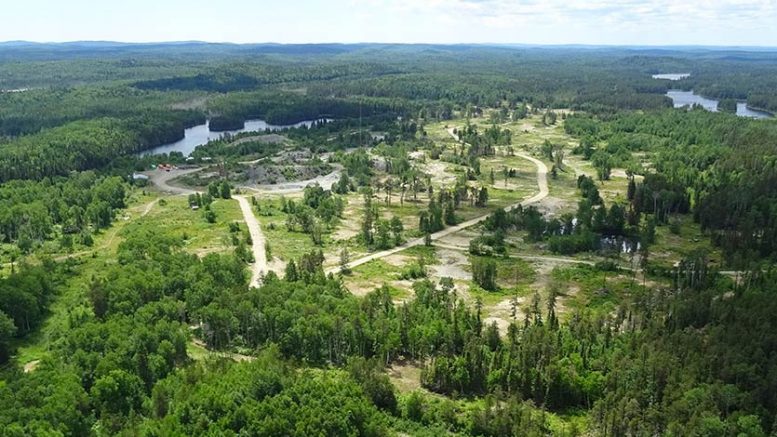 Argonaut Gold (TSX: AR) has announced high grade results from the ongoing 25,000-metre drill program at its Magino gold project in Ontario. The drill program is taking place as construction of an open pit mine at Magino advances toward expected first production in 2023.

The zone contains two parallel vein systems within a structure approximately 25 metres wide that mimics the trend of a nearby aplite dike, and appears to transect eastward into the volcanic rock package for an apparent strike length of 1.5 km to the property boundary. Previously reported drill holes MA20-057 and MA20-070 intersected the gold-bearing vein system down-plunge for an estimated apparent true width ranging between 3.4 metres and 4.8 metres. Additional drilling perpendicular to the vein system is required to accurately define the width of the vein systems.

An infill definition drill program at the Elbow Zone is tightening the drill spacing to approximately 40 metres (upper portion) and 80 metres (lower portion), from the bottom of the planned pit to a vertical depth from surface of approximately 1,000 metres. The drilling continues to define numerous high-grade gold zones within this steeply east-plunging structure. Recent highlights are hole MA21-063, which cut 6 metres of 7.7 g/t gold, and hole MA21-067, which returned 4.5 metres of 6.5 g/t gold, including 1.5 metres of 17.7 g/t gold. Close to 17,000 metres of drilling is still needed to complete the Phase 1 definition drilling program.

Magino is 40 km west of Wawa, Ont., immediately west of the Island Gold mine, which is 100% owned and operated by Alamos Gold (TSX: AGI; NYSE: AGI).

In addition to Magino, Argonaut owns the El Castillo mine and San Agustin mine, which together form the El Castillo Complex in Durango, Mexico, the La Colorada mine in Sonora, Mexico, and the Florida Canyon mine in Nevada. For more information see http://www.argonautgold.com/.