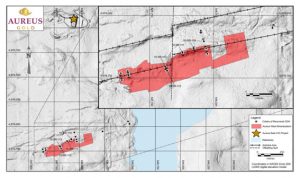 Aurelius Minerals has released assay results for three holes completed at its past-producing Aureus gold project in Nova Scotia, approximately 150 km from Halifax, by a previous project operator in 2010.

The assays are from previously unsampled and unassayed core extracted from the Aureus West portion of the 16.8-sq.-km project.

“The results of hole 10-SR-113 further solidify our conviction in the opportunity and potential of the Aurus gold project,” Mark Ashcroft, the company’s president and CEO, said in a release. “Unlike the Bendigo (goldfield) analogue in Australia, Nova Scotia has yet to see extensive exploration to depths beyond a few hundred metres. Our initial program aims to drill up to 1 km from surface as we look to discover additional mineralization at depth, further bolstering an already exciting project.”

Ashcroft added that the gold mineralization at Aureus West has been defined over almost 2 km of strike and down to a depth of 300 metres. LiDAR (light detection and ranging) surveys completed over this area also suggest potential for parallel mineralized systems.

Approximately 20 stacked saddle-reef veins have been defined thus far at Aureus West, with a total of four holes of unsampled core reported to date. Earlier in August, Aurelius released assays for the first hole, which hit 2.1 metres of 65.2 g/t gold, starting at 54.9 metres.

Aurelius acquired a 100% interest in the Aureus East and West, Tangier and Forest Hill properties in Nova Scotia in February, for total consideration of US$8.2 million, payable in cash or shares.

Aureus West features an inferred resource of 270,000 tonnes, at 6.1 g/t gold, containing 53,200 gold oz. Aurelius is working to upgrade (and grow) an open-pittable resource at the property, with 5,000 metres of drilling planned for the remainder of this year and a further 15,000 metres scheduled into 2021.

The past-producing Aureus East portion of the property hosts the Aureus East underground gold mine, which has 2,250 metres of underground development completed, in addition to a 300 t/d gravity and flotation processing plant with an on-site assay lab. The mine is currently on care and maintenance – Aurelius started underground drilling at the site as it works to confirm high-grade structures to upgrade and grow resources. Aureus East hosts a historic resource of 152,000 indicated tonnes, at 11.9 g/t gold, and 434,000 inferred tonnes, at 6.9 g/t gold.