MONTREAL - Canada's first graduating class of 95 mine workers with nationally recognized skills were honoured at the CIM on May 24, 2011. The Canadian Mining Credentials Program (CMCP) was developed by the Mining Industry Human Resources...
By Canadian Mining Journal Staff May 25, 2011 At 5:00 pm 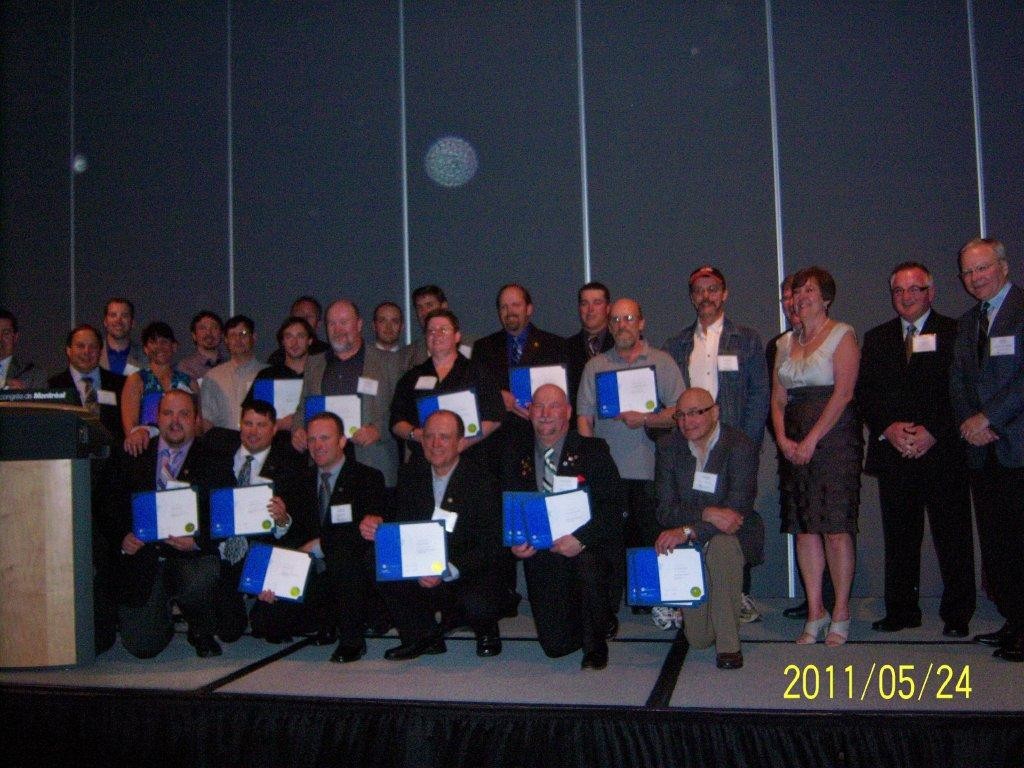 Some of the CMCP graduating class honoured at the CIM.

MONTREAL - Canada's first graduating class of 95 mine workers with nationally recognized skills were honoured at the CIM on May 24, 2011. The Canadian Mining Credentials Program (CMCP) was developed by the Mining Industry Human Resources Council (MiHR) in Kanata, ON.

The certification program was six years in development and is based on industry-defined standards. To date, it includes national occupational standards developed for four key mining occupations: underground hard rock miner, surface miner, minerals processing operator, and diamond driller. These four standards form the basis for the program's certification criteria.

Graduates holding a Level One certificate have put in 1,000 hours, and those who hold Level Two have logged an additional 6,000 hours.

Until now, miners and mineral processors have lacked a national recognition system. This factor has hindered recruitment and advancement within the industry because skilled employees have had no formal documentation of their experience, which may prompt them to leave positions and seek opportunities elsewhere. A recent MiHR survey showed that industry turnover in these occupations to be twice as high as in other mining sector jobs.

Employers, meanwhile, have struggled to evaluate the qualifications of experienced candidates, wasting time and resources to retrain new hires who in fact may already be competent but haven't had a systematic means of acknowledging it.

"Through certification, mining workers and employers alike finally have the much-needed and long-awaited recognition that other industries have had for some time," highlights Barbara Kirby, senior director workforce development at MiHR, who has led the project since its inception.

"Some of these people have been working in the mining industry for 20 or 30 years and have never had an official or formal way to recognize their skill and capability," said Jim Utley, chair of MiHR's standing committee on certification, and VP of human resources at Teck. "This program provides that opportunity to recognize those people, as well as provide new people coming into the industry with a pathway for career development and skills recognition that lays the groundwork for them to advance to even more senior positions in our organizations in the future."

"When I had to restart my career in 2001 when the mine closed, I had no credentials," said Dave Pagnucco, a CMCP-certified minerals processing operator at Highland Valley Copper. "I really had to start at the bottom again because there was no program in place. I think that in the future we'll be able to move from one mine to another, and start off at a level that reflects our skills and credentials."

Certification will play an important role in increasing and retaining the valuable skills needed to sustain the mining industry. MiHR's research estimates that between now and 2020, the industry will require approximately 100,000 workers to support growth and replace retirees. Approximately 20% of these new hires will be needed for skilled occupations such as production miners, development miners, heavy equipment operators, and mill operators.

MiHR is to be commended for creating a program that supports both employees and employers.