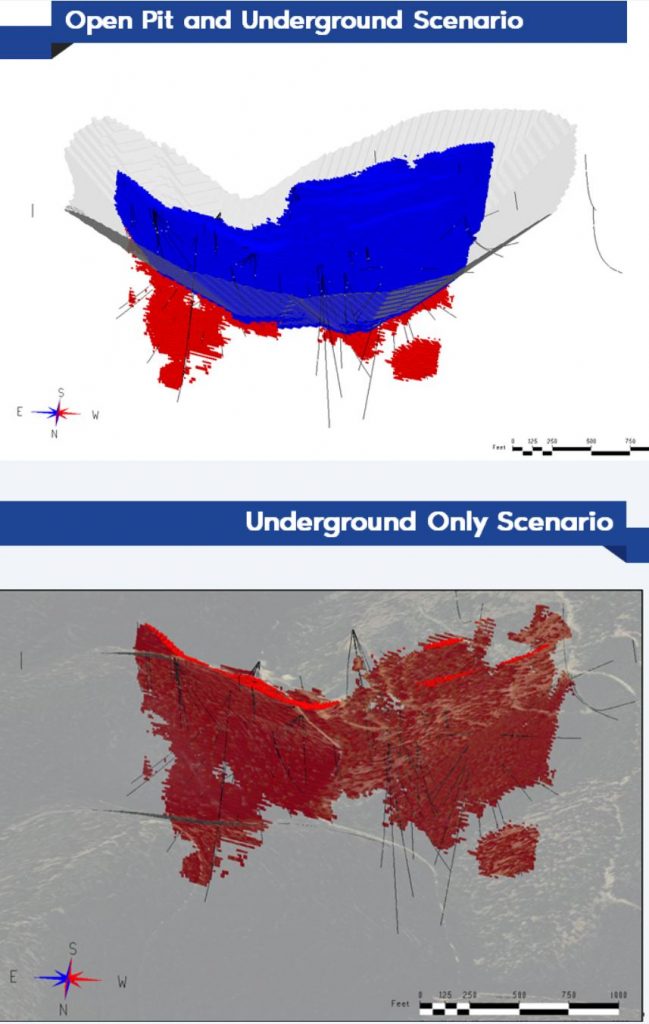 Two different development options are under consideration at the Iron Creek project in Idaho. (Image: First Cobalt Corp.)[/caption] IDAHO – Toronto-based First Cobalt Corp. announced high assay results from surface samples taken at its Iron Creek project 40 km southwest of Salmon. The results came from a target 1.5 km to the south of the main project. First Cobalt traced a surface outcrop across a 295-metre strike length. High grade values include 10.7 metres of 0.24% cobalt, including 1.5 metre of 0.48% cobalt, and 7.6 metres of 0.26% cobalt. The new Ruby zone is geologically similar to other mineralization found at Iron Creek. The company has not determined whether the new zone is a structural offset of Iron Creek or a separate stratigraphic unit. The Ruby zone was previously sampled on surface, but two diamond drill holes were abandoned at depth. Noranda drilled the second hole in 1978 and did find chalcopyrite stringers in the footwall of the cobalt-bearing horizon, but that is all that is known of what lies below the surface. A new resource estimate for Iron Creek is expected before the end of the year. The 2018 estimate used a cut-off between 0.03% and 0.18% cobalt and found 29.6 million inferred tonnes grading 0.08% cobalt (45.4 million lb. contained) and 0.30% copper (175.4 million lb. contained). That is a cobalt equivalent grade of 0.11%. Both an underground development or one with surface and underground production are under consideration. Visit www.FirstCobalt.com.