Commentary: Despite price rise, copper at historic low against gold

According to the popular adage, copper has a doctorate in economics, with an ability to predict turning points in the global economy. […]
By Alisha Hiyate October 22, 2020 At 12:11 pm 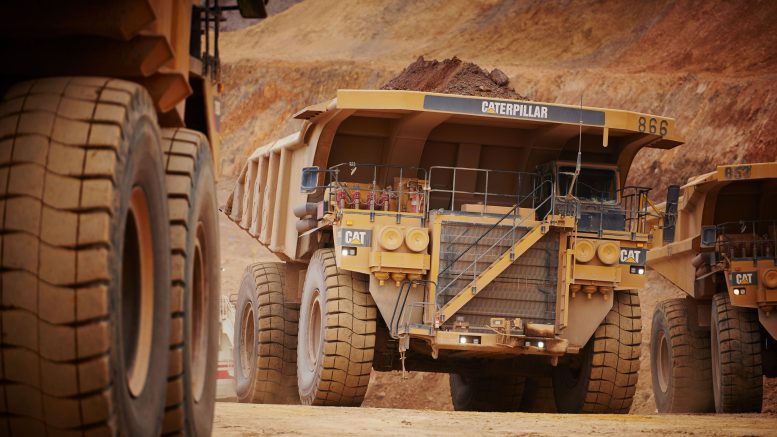 At Glencore’s Katanga copper mine in the Democratic Republic of Congo. Credit: Glencore

At Glencore's Katanga copper mine in the Democratic Republic of Congo. Credit: Glencore[/caption] According to the popular adage, copper has a doctorate in economics, with an ability to predict turning points in the global economy. This proverb stems from the metal’s use in widespread applications, from power generation and electricity distribution to iPhones. Since the end of March, the price of the base metal has recovered remarkably well, rising from barely US$4,900 per tonne to over US$6,600 per tonne by the end of September. Dr. Copper is looking to next year, and the price rise of 35% in the second and third quarters suggests that a global economic recovery is upon us. The price of gold benefits from the exact opposite, namely political and economic turmoil. We have had that in spades since March, so the precious metal has also performed well in the six months to end-September, rising 18% to US$1,900 per ounce. Gold and copper might appear unlikely bedfellows. The base metal is 15,000 times more abundant in the Earth’s crust than the precious metal (60 parts per million [ppm] compared with gold’s 0.004 ppm), and copper is renowned for its wide range of practical uses in modern economies, while the other is usually hidden away. Nevertheless, gold and copper are grouped together in the middle of the periodic table (separated in Group 11 by silver) and, as a result, these elements are frequently found together in nature. There are over 600 mines in the world that produce copper, according to the Mining Intelligence database, and 52% include gold in their output. Indeed, the world’s largest gold producer, until recently, was actually primarily a copper mine — Grasberg, which is transiting to an underground operation, and has an almost equal value of gold as copper in its production at current metal prices. (All other things being equal, Grasberg becomes primarily a gold mine, with by-product copper, at a gold price of US$2,110 per ounce.) Based on monthly averages, gold traded at a price of circa 4,000-7,000 times that of copper from late 1987 to mid-2005, before collapsing to multiples of below 3,000 in 2006-07. Since then, relative to copper, gold has enjoyed a 13-year bull run (see Au/Cu price graph since 1968). This has increased the economic benefit of copper mines processing the precious metal as a by-product. 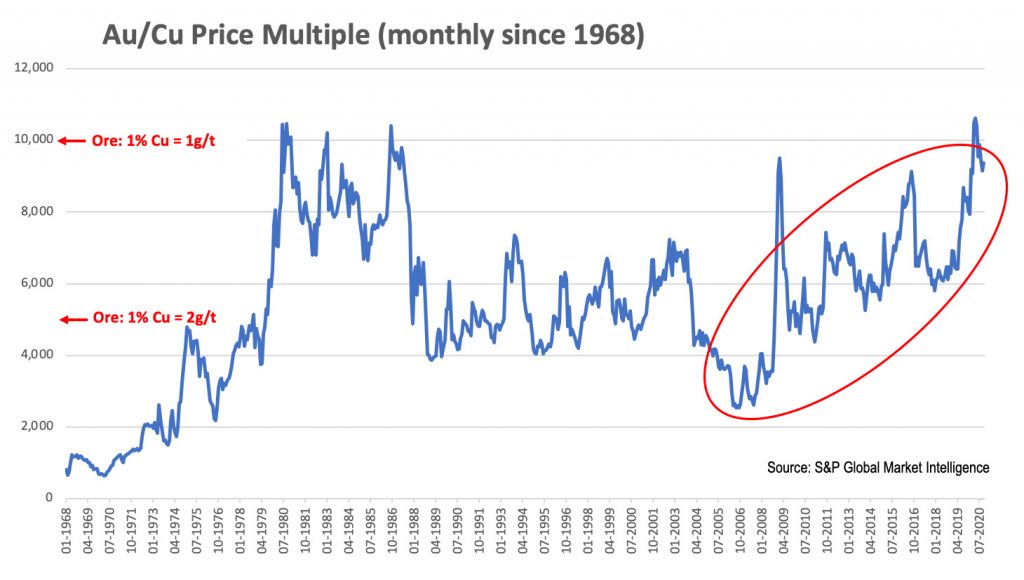 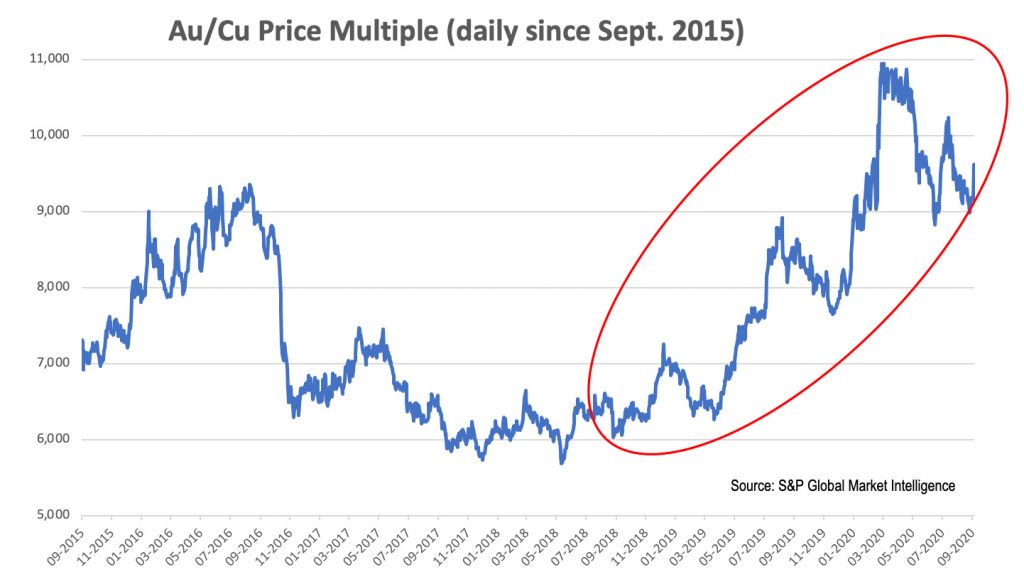 Individual copper mines have always sought to boost their revenue from any by-product gold (and silver), not least in recent years through precious-metal streaming deals. Now, at these price differentials, precious-metals companies will surely be eyeing-up acquiring copper-gold assets. Compared with primary gold mines, copper-gold operations tend to be much larger, and have longer lives. The increasing price differential of the past two years is likely to lead to precious-metals producers buying base-metal assets to diversify, and lengthen their own production streams. The chief executive of Barrick Gold, Mark Bristow, confirmed as much in an interview in May with the Financial Times, saying “there are bound to be opportunities.” Barrick was immediately linked with Freeport McMoRan, whose assets include the Grasberg mine in Indonesia. Grasberg’s appeal to precious-metals producers can be seen in the table below. At current metal prices, gold would contribute over 47% of the mine’s production value based on last year’s output. There is no shortage of money in the coffers of gold producers; at the metal prices of Oct. 2, last year’s mined production is worth almost US$202 billion. Despite sharply higher copper prices, gold is still comfortably ahead of the current annualized value of global copper production (some US$134 billion), although it remains well short of iron ore (at around US$283 billion). The world’s top 20 copper producers reported an output of over 8 million tonnes of the yellow metal last year, with a combined gold by-product output of some 1.6 million ounces. These operations contributed almost 40% of the world’s mined copper output in 2019, but the gold they produced represented only 1.5% of the global total. Nevertheless, gold is a significant value-add at many copper mines. Of the top 20 copper producers, 12 reported gold as a by-product last year, with the precious metal contributing over 4% of the production value at six operations. Using 2019 production data (courtesy of the Mining Intelligence database), and metal prices as of Oct. 2, gold contributes 5.4% of the production revenue at the top 20 copper mines (albeit 54% of the total gold contribution comes from Grasberg). Dr. Copper is clearly predicting an economic recovery but, in the meantime, gold is a useful prescription to boost mined wealth. For gold companies, these assets must be looking increasingly attractive. 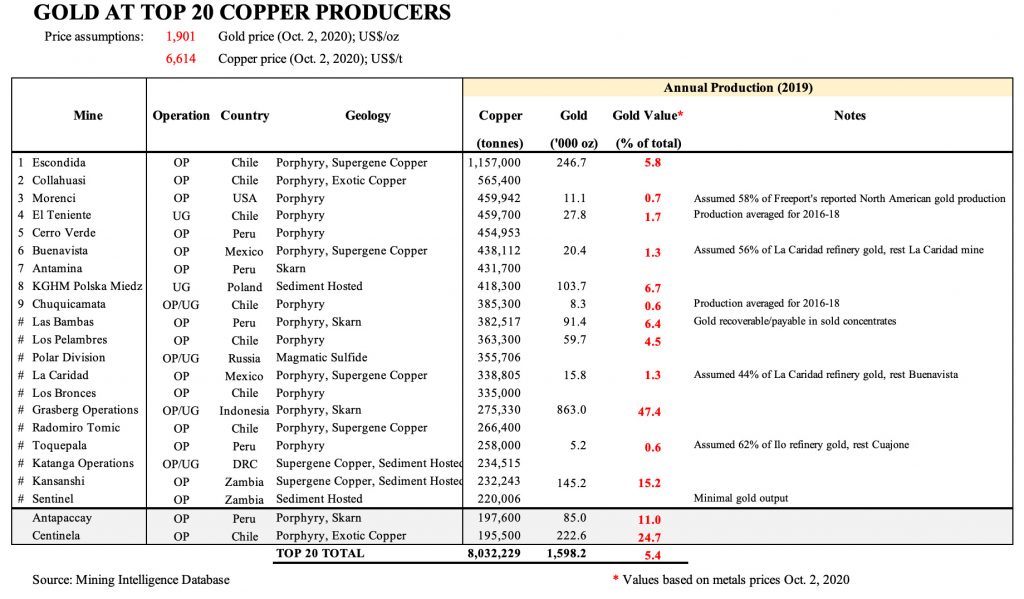 — Dr. Chris Hinde is a mining engineer and the director of Pick and Pen Ltd., a U.K.-based consulting firm he set up in 2018 specializing in mining industry trends. He previously worked for S&P Global Market Intelligence’s Metals and Mining division. Katja Freitag is the manager of Mining Intelligence. Mining Intelligence is a leading provider of comprehensive and essential data on the global mining industry and is owned by Glacier Resource Innovation Group. This article originally appeared in The Northern Miner, CMJ's sister website and part of the Glacier Resource Innovation Group.