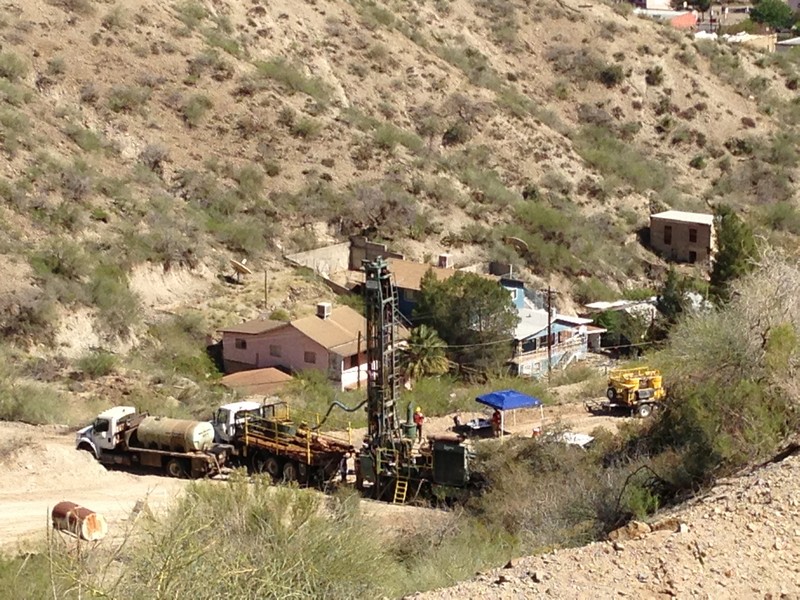 Van Dyke copper project Credit: Copper Fox[/caption] ARIZONA – Copper Fox Metals has released an updated resource for its wholly owned Van Dyke project in the Globe-Miami mining district after completing a re-assay program last year to update its geologic model. As a result, updated indicated resources are now at 97.6 million tonnes grading 0.33% total copper (0.24% recovered soluble copper) for a total of 717 million lb. of total copper and 517 million lb. of soluble copper. Updated inferred resources stand at 168 million tonnes at 0.27% total copper and 0.19% recovered soluble copper totalling 1 billion lb. and 699 million lb. of the metal, respectively. The sum of these updated figures represents a 51.6% increase in total contained recovered soluble copper alongside a minor increase in the associated grade. The Van Dyke deposit includes an oxidized portion of a porphyry copper mineralized unit, which has undergone cycles of weathering, oxidation and enrichment. The main mapped zones include an oxide zone, which progresses downwards into a supergene portion before transitioning to sulphide hypogene mineralization. The oxide and supergene material are largely soluble in acid and a component of this material also dissolves into a cyanide leach. In the resource, the sum of the acid and cyanide soluble copper makes up the total soluble copper estimate. The deposit remains open to the south and southwest. “The 2019 work program has increased the confidence level in the project resources and significantly increased the recoverable soluble copper content of the Van Dyke deposit,” Elmer Stewart, the company’s president and CEO, said in a release. “The 2019 review of historical exploration data combined with the current resource estimation, indicates the deposit could be open to the south and southwest with a possible strike extension of between 1 km and 2 km. Additional drilling will be required to realize this potential and to define the unexplored portions of the Van Dyke deposit.” A 2015 preliminary economic assessment for the project outlined an 11-year in-situ leach operation, producing an average of 41.5 million lb. of copper cathode annually at AISCs of US$1.44 per lb. With an initial capital cost of US$204 million, the net present value estimate for the project, at an 8% discount rate, came in at US$149.5 million. In addition to Van Dyke, Copper Fox has a 25% interest in the Schaft Creek joint venture (75% Teck Resources). A conceptual study is underway for the porphyry copper-gold-molybdenum-silver deposit in northern B.C. to optimize a 2013 feasibility report. In addition, the company also owns Sombrero Butte and Mineral Mountain copper exploration projects in Arizona in addition to having a 24.4% stake in District Copper. For more information, visit www.CopperFoxMetals.com.