MANITOBA – Rockcliff Metals has released an updated resource for its wholly owned Rail deposit, with both the total resource tonnes and […]
By Magda Gardner April 1, 2020 At 3:55 pm 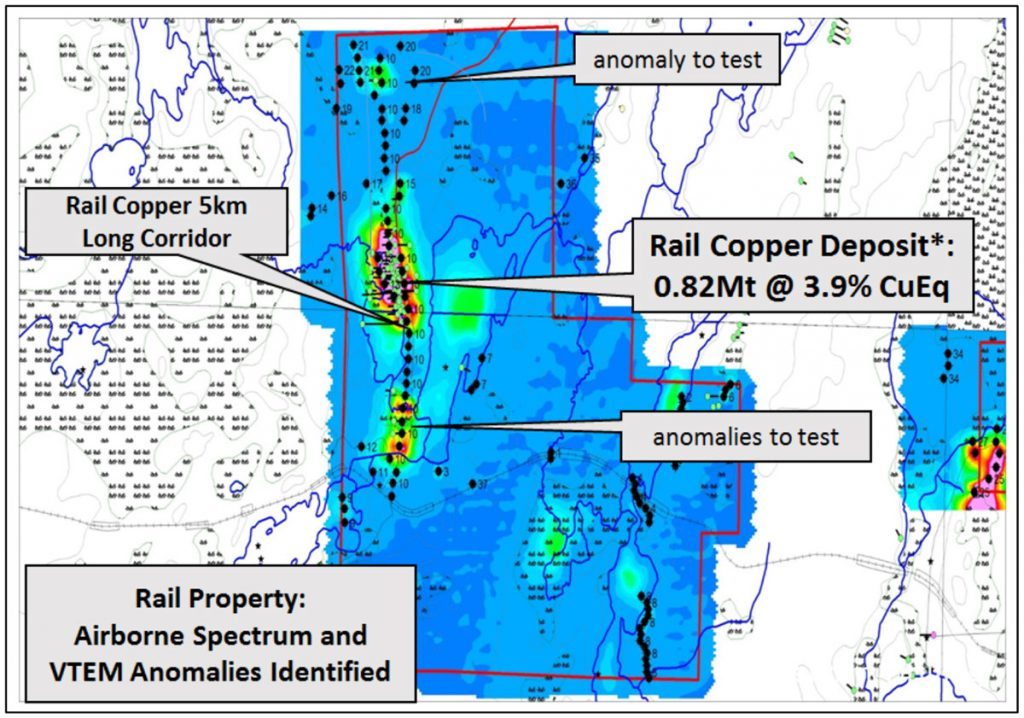 Geophysical anomalies at Rail Credit: Rockcliff[/caption] MANITOBA – Rockcliff Metals has released an updated resource for its wholly owned Rail deposit, with both the total resource tonnes and contained copper-equivalent metal at the 20-sq.-km property more than doubling. Indicated resources have increased to 1.17 million tonnes at 3.52% copper-equivalent for a total of 90.7 million lb. of contained copper-equivalent metal, compared to 820,000 tonnes at 3.9% copper-equivalent containing 70.3 million lb. of metal previously. In addition, the latest release also includes a new high-grade inferred resource of 728,000 tonnes grading 4.09% copper-equivalent, which contains a further 65.6 million lb. of copper-equivalent. “We are very pleased that the successful drill programs at Rail have added substantially to the Rail indicated classification tonnage,” Alistair Ross, the company’s president and CEO, said in a release. “The high-grade Rail deposit remains open along strike and at depth and several additional nearby copper targets remain untested.” Rockcliff intends to complete a preliminary economic assessment for Rail in the first half of this year. The previous resource estimate for this property was completed back in 2010. Last year, the company completed over 30,000 metres of drilling across the Rail, Tower and Talbot properties within Manitoba’s Flin Flon-Snow Lake greenstone belt; a further 70,000 metres is planned for 2020. With a lease on the 1,000 t/d Bucko mill and processing facility within trucking distance, Rockcliff plans to make potential production decisions for the deposits at the end of the year. In March, the company released updated resources for the Tower and Talbot deposits. For more information, visit www.RockcliffMetals.com.