Yesterday, Ontario Premier Doug Ford and Quebec Premier Francois Legault both ordered the closure of non-essential businesses, effective as of midnight on […]
By Alisha Hiyate March 24, 2020 At 3:50 pm 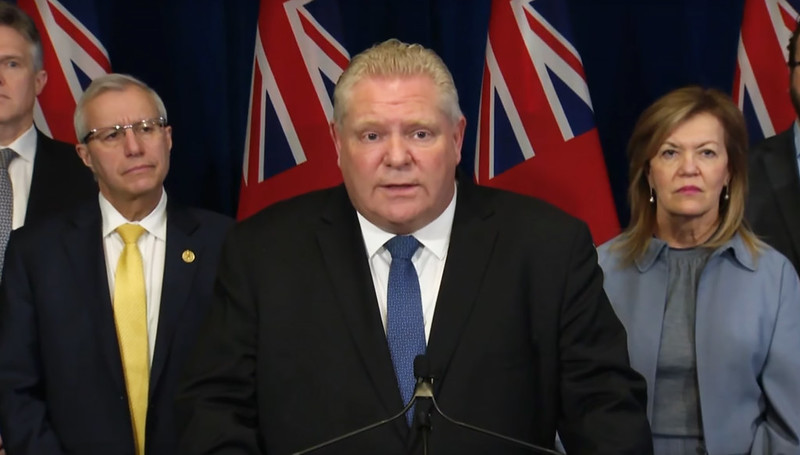 Ontario Premier Doug Ford (centre) with Economic Development Minister Vic Fedeli (left) and Health Minister Christine Elliott at an announcement on March 21. Credit: Ontario Government[/caption] Yesterday, Ontario Premier Doug Ford and Quebec Premier Francois Legault both ordered the closure of non-essential businesses, effective as of midnight on Tuesday, Mar. 24. Quebec's shutdown will last three weeks ending April 13, while Ontario's shutdown is for two weeks. For miners and explorers, there is some divergence between the two provinces on whether or not they are considered essential. While Quebec has deemed the aluminum manufacturing sector as essential, it ordered mining operations to reduce their activities to a minimum. Mineral exploration is not listed as an essential business. Ontario's definition of essential is more broad, including “businesses that ensure global continuity of supply of mining materials and products (e.g. metals such as copper, nickel and gold) and that support supply chains in northern Ontario including: While Ontario mines and mineral exploration and development projects are permitted to continue full operations, some are still shutting down temporarily. Here's a list of announcements by Ontario and Quebec mining and exploration companies in response to the provincial orders. Iamgold's Westwood gold mine in Quebec will be put on care and maintenance with minimal staff in place for the three-week period. However, the company says work at its Côté development project in Ontario, will continue with reduced staff. The company's Rosebel mine in Suriname and Essakane mine in Burkina Faso continue to operate, with both mines moving into “self-confinement” this week to protect staff and communities. Eldorado Gold's Lamaque mine will also ramp down for three weeks, with staff remaining onsite only to maintain health and safety, security and environmental systems. However, the company announced today it has just received a permit from Quebec's Environment Ministry to increase production at the Triangle deposit at Lamaque to 2,650 t/d from 1,800 t/d, when operations resume. After initially saying its LaRonde and Goldex mines, as well as its 50%-owned Canadian Malartic mine in Quebec (with Yamana Gold), may be affected, but not specifying how, Agnico Eagle Mines reported late Tuesday that all would be placed on care and maintenance until Apr. 13. Wesdome Gold Mines' Eagle River complex in Wawa, Ont., is running with a reduced workforce; the underground mine is operating, but mining at the Mishi open pit has been suspended, and exploration at the site reduced by 40%. Alamos Gold has suspended operations at its Island gold mine, 83 km northeast of Wawa, in northern Ontario, but not its Young-Davidson gold mine. The two-week suspension at Island gold is due to its unique set-up, with 50% of employees being locally based and 50% flying in from various parts of Ontario and Quebec. Operations at the company's Mulatos mine in Sonora state, Mexico have not been affected, but measures are in place for medical screening of employees, as well as other prevention measures. Wallbridge Mining has exploration projects in both Quebec and Ontario and announced Monday, ahead of the provincial announcements, that activity at its flagship Fenelon exploration project in Quebec and projects in Ontario would be suspended until April 15. Yesterday Kirkland Lake Gold announced it would reduce its workforce at the Detour Lake gold mine in northern Ontario to 300 from 1,100. Newmont reported yesterday that four of its mines, including Musselwhite in northern Ontario and Éléonore in Quebec would be placed on care and maintenance temporarily.