SASKATCHEWAN – Star Diamond Corp. of Saskatoon has filed the preliminary economic assessment for its Star-Orion South project 60 km east of […]
By Marilyn Scales May 31, 2018 At 4:25 pm 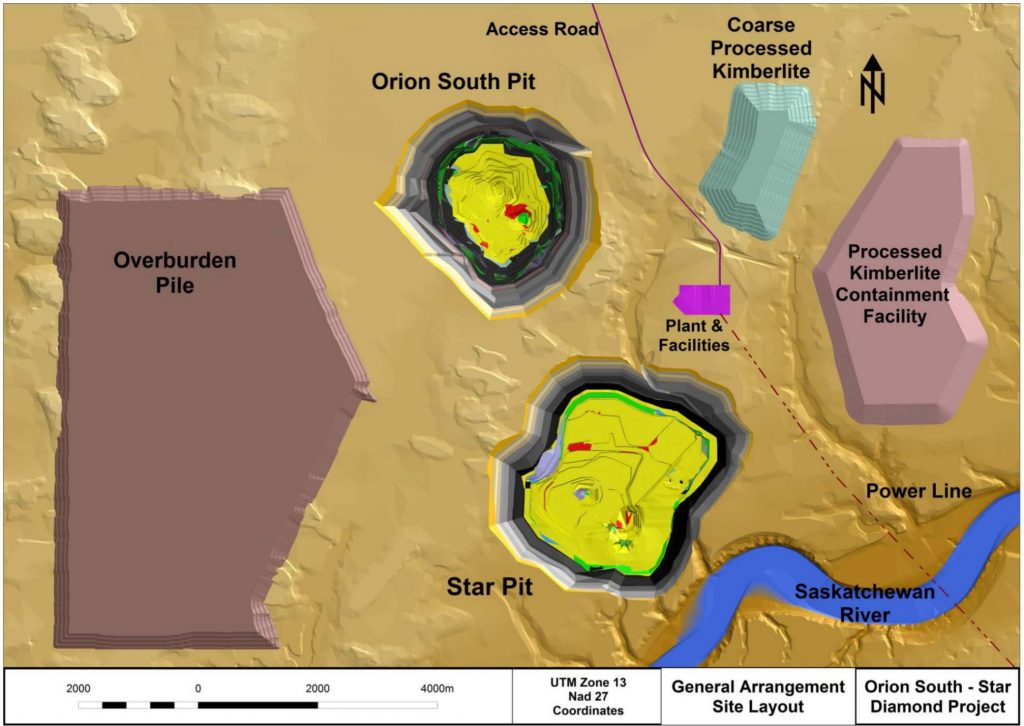 The Star-Orion South diamond site plan proposed in the PEA. (Image: Star Diamond Corp.)[/caption] SASKATCHEWAN – Star Diamond Corp. of Saskatoon has filed the preliminary economic assessment for its Star-Orion South project 60 km east of Prince Albert. The report estimates that 66 million carats of diamonds could be recovered from an open pit over a 38-year project life. After taxes, the base case scenario has a net present value (7% discount) of $2.0 billion and an internal rate of return of 19%. A payback period of 3.4 years is anticipated. The plant would treat a total of 470 tonnes of kimberlite at a weighted average grade of 14 carats per hundred tonnes. A second scenario (case one) using higher diamond prices would have a pre-tax NPV (7%) of $5.4 billion and an IRR of 32%. Star says the pre-production capex would total $1.4 billion. That would include $350 million for a processing plant, $250 million for site facilities; $74 million for stripping, $410 million for stripping equipment, $64 million for kimberlite mining equipment, $156 million for other costs, and a contingency of $106 million. Star owns 100% of the Star-Orion South diamond project and Rio Tinto has an option to earn 60%. Please visit www.StarDiamondCorp.com.