OTTAWA and SUDBURY, Ont. – Mark Hannington, Margaret Stewart and Justin Emberley from the University of Ottawa have partnered with Metal Earth to […]
By Marilyn Scales July 24, 2018 At 4:29 pm 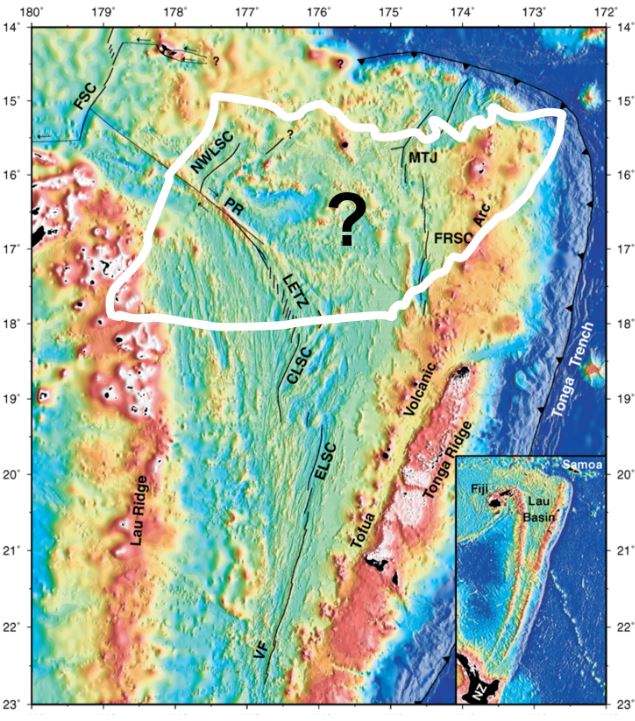 OTTAWA and SUDBURY, Ont. – Mark Hannington, Margaret Stewart and Justin Emberley from the University of Ottawa have partnered with Metal Earth to provide insights to ore deposits in the Superior Craton. [caption id="attachment_1003724116" align="alignright" width="395"] Bathymetric map of the Lau Basin showing major spreading centers and structures. White line represents the outline of the Abitibi greenstone belt at the same scale as the bathymetric map. (Image: Metal Earth, MERC)[/caption] The joint Modern-Ancient Ocean Crust project studies modern ocean environments to develop an understanding of the factors that localize deposits on the sea floor. Researchers will then be able to take this knowledge and apply them to the ancient deposits in the Abitibi in the Superior Craton. The advantage of studying the seafloor is that it provides the opportunity to observe the different stages throughout the mineralization process. Deposits currently on land initially formed in ancient oceans and represent the culmination of these processes, making it difficult for the Metal Earth team to study the distinct stages of mineralization. Throughout the modern oceans, different stages in the mineralization process are currently taking place in different plate tectonic settings and can be observed and compared to the ancient deposits currently on land. The Modern-Ancient Ocean Crust team has chosen a location on the sea floor that holds similar characteristics to that of the Abitibi in the Superior Craton. They considered tectonic environments, rock and deposit types to end up in the Northern tip of the Lau Basin surrounding Fiji. The project will be specifically studying VMS deposits (zinc, copper, lead, gold) utilizing geophysics and geological mapping. The Modern-Ancient Ocean Crust team will head out on the research vessel on Dec. 10, 2018, and will return Jan. 27, 2019. Instruments will be used to measure the magnetic signatures of rocks, heat flow through the crust, and the deep structure of the oceanic crust. The team will be mapping the topography of the seafloor, collecting rock and sediment samples, and identifying plumes in the water column that may indicate areas where metals are being deposited on the seafloor. This fall, the team will release a geological map of the Lau Basin. This will be one of the first geological maps of the sea floor. After the collection of data is complete in January, they will be analyzing and interpreting the data to be able to start making comparisons with the Metal Earth team in the spring of 2019. Metal Earth, the Mineral Exploration Research Centre’s (MERC) research project,  seeks answers to fundamental questions related to how secular changes in Earth’s evolution have resulted in differential metal endowment in space and in time in the Precambrian shield. Find out more about Metal Earth at https://MERC.Laurentian.ca/MetalEarth.