Foran Mining (TSXV: FOM) is considering expanding the 30,000-metre drill program under way at its McIlvenna Bay project in Saskatchewan after receiving […]
By Canadian Mining Journal Staff June 1, 2021 At 3:25 pm 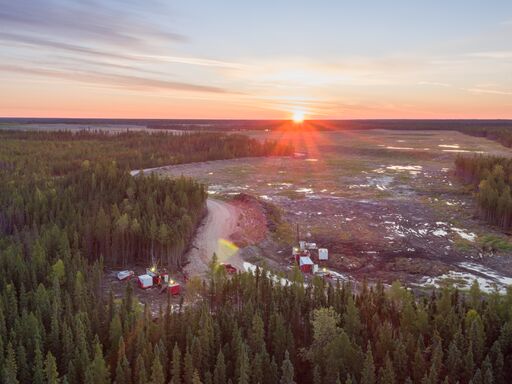 Foran Mining (TSXV: FOM) is considering expanding the 30,000-metre drill program under way at its McIlvenna Bay project in Saskatchewan after receiving encouraging results and a deal with Fairfax Financial Holdings for a $100-million investment.

Drilling at McIlvenna Bay continues to define a band of thick, copper-rich mineralization in the Massive Sulphide (MS) and underlying Copper Stockwork zones (CSZ) at the project, including in Hole 216w1, which hit one of the widest high-grade copper intercepts to date.

Foran says the results suggest indicated resources can be expanded and upgraded.

“Hole MB-21-216w1 has delivered the widest intercept of continuous copper rich mineralization ever encountered at the McIlvenna Bay deposit,” said Dan Myerson, executive chair of Foran, in a release. “This is yet another of a series of holes drilled along the upper plunge line of the deposit that continues to define a band of thick, high grade copper mineralization hosted in both the MS and the CSZ. These strong results bode well for future mining costs and ultimate economics as we optimize the throughput of our envisioned centralized mill within the Hanson Lake District and prove out the value of McIlvenna Bay and this multi-generational camp.”

The company released a positive prefeasibility study for McIlvenna Bay, located about 65 km from Flin Fon, Man., last March. The study outlined a $261-million underground mine with a nine year mine life. A feasibility study for the project, which Foran plans to build as the world's first carbon neutral copper mine, is due out in the fourth quarter.

Foran's agreement with Fairfax, for a $100-million private placement in two tranches, was announced on May 25 and is subject to shareholder approval. The first tranche will see Fairfax acquire 27.8 million voting shares at $1.80 apiece plus 8 million common share warrants that can be exercised at $2.09 for a period of five years. The second tranche will comprised of 27.8 million non-voting shares acquired at the same price, plus 8 million warrants.