FORUM: Miners look for suppliers who can commit

In an increasingly complex business environment, what do mining companies want from suppliers? It turns out, they’re looking for much more than […]
By Alisha Hiyate November 27, 2019 At 3:59 pm 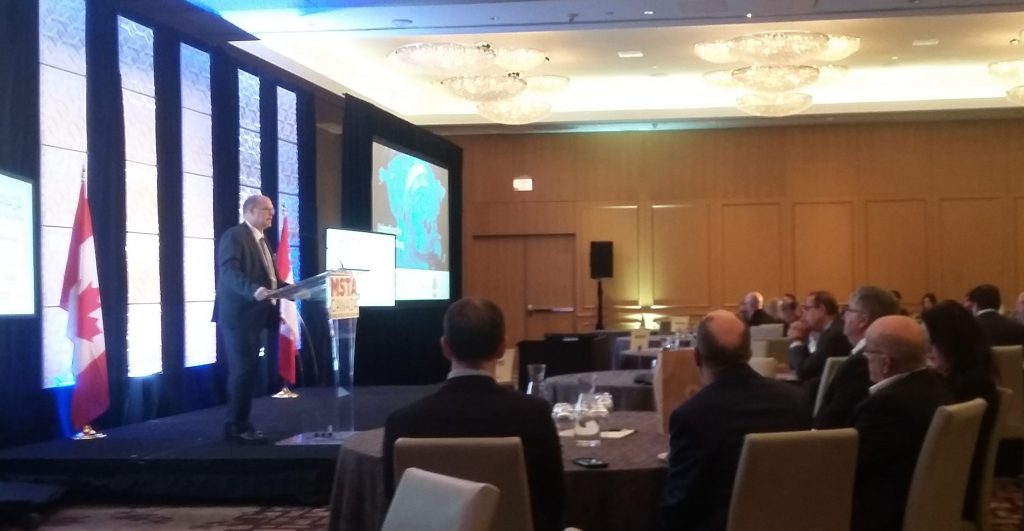 Managing director of MSTA Canada, Ryan McEachern, kicks off the supplier organization's annual forum on Nov. 26. Credit: Canadian Mining Journal[/caption] In an increasingly complex business environment, what do mining companies want from suppliers? It turns out, they're looking for much more than just technology. At MSTA Canada's two-day annual forum in Toronto this week, miners emphasized the desire for a long-term relationship with vendors rather than a transactional relationship, as well as the need for technology that reduces costs, water and energy use, and speeds up development. Sunil Kumar, senior director, energy strategy and engineering at Kinross Gold, gave an overview of the company's five major projects under development, including a debottlenecking project at its Tasiast mine in Mauritania, and provided some advice for vendors who want to supply the company. In addition to ensuring they meet the technical and performance requirements, including a robust safety record, Kumar said vendors should focusing on life-cycle costs, not just initial capex. He also said the company prefers vendors who can stay the course and work with Kinross as a partner throughout the mine life of an operation. “We prefer to have long-term relationships because we're operating these mines not just for one or two years, we're there for a long period of time.” In addition, vendors should be prepared to disclose the specific people on the team that would be working with the company and their expertise and background. “Don't just tell us what the company experience is; the people that are working on the project, give us their CVs, tell us their experience because we want to know what they're able to do on the project for us.” Importantly, as Kinross's operations are mostly remote, knowledge of the the region and country, including tax laws, language, getting work permits and knowledge of local logistics and supply chains is important. “If it's your first time in the country, not to say you can't do it, but demonstrate that you've partnered up with somebody who can do it. This is an area that the federal government through EDC and other agencies might be able to support you in.” While it can be a challenge in remote locations, post-installation support is also important, Kumar said. “Especially as we start looking at new technologies that are more sophisticated, we may not have the skill set at our site with our staff to be able to do maintenance work on it,” he said. “We're going to need support from our vendors. So how are you going to provide that to us?” Kumar highlighted several emerging technology trends that Kinross and other miners are interested in, including: Newcrest finds a niche in Canada Eric Strom, head of strategic studies at Newcrest Mining, spoke about the company's recent investment in the Red Chris mine in B.C. and its plans there. The company acquired a 70% interest in the copper-gold mine from Imperial Metals earlier this year, and is in the midst of a two-stage transformation it believes will turn Red Chris into a Tier 1 asset. Currently an open-pit mine, Newcrest intends to transition the operation into an underground block-cave mine in six years' time. In addition to Red Chris, Strom said there many other undeveloped potential block-caving opportunities in B.C. “Newcrest has found a niche within the Canadian mining industry whether its the block cave or in the innovative approaches where we just do it instead of just talking about it,” Strom said. “And when I combine that approach with the number of block caves that are undeveloped in British Columbia, I think we're going to be shooting fish in a barrel for quite a while here.” The Australia-based company will use technology it has successfully applied at its Cadia gold and copper mine in New South Wales, including block caving and coarse ore flotation. The low-cost mine has an all-in sustaining cost (AISC) of only US$132 per oz. gold. Currently, the company is working to optimize existing processes at Red Chris, build resources and continue to explore as the Red Chris orebody is not yet well drilled or understood, Strom said. At the same time, it is working to assess the viability of coarse ore flotation and block caving at Red Chris. Strom said the company wants to hear about solutions for next-generation caving that could save costs to build deep caves (which he estimated could be $750 million to over $1 billion for a mine the size of Red Chris) and that could speed up underground development and shaft sinking. Newcrest is also looking to maximize the use of low-cost electric power, and is interested in advanced ground monitoring technology and advanced methods for selective ore sorting and processing, including low-energy grinding and in-mine processing. (More information is available on Newcrest's website under Briefing Books). The Mining Suppliers Trade Association or MSTA Canada aims to connect its members with buyers around the globe and help promote their products. The MSTA Canada Forum took place Nov. 26-27 in Toronto.