The first quarter of the year marked a continuing recovery in diamond prices for Mountain Province Diamonds (TSX: MPVD) – but production […]
By Canadian Mining Journal Staff April 14, 2021 At 1:54 pm 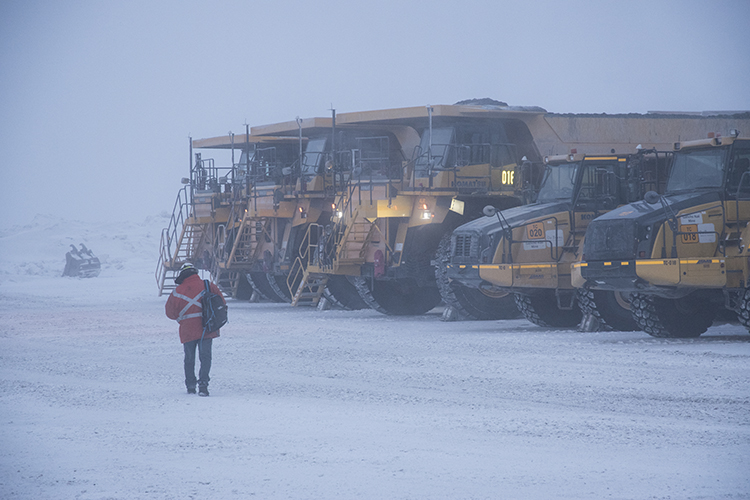 A worker at the Gahcho Kue diamond mine. Credit: Mountain Province Diamonds

The first quarter of the year marked a continuing recovery in diamond prices for Mountain Province Diamonds (TSX: MPVD) – but production at the company's 49%-owned Gahcho Kué mine, in the Northwest Territories, was severely curtailed by a Covid-19 outbreak.

The mine, operated by 51% owner De Beers, was linked to at least 18 cases and was shut down for 22 days to get the outbreak under control.

After suspending production on Feb. 6, a return of production personnel was announced in late February.

Tonnes of ore mined in the first quarter were down 50% from the year earlier quarter, with tonnes of ore treated down 31% and carats recovered 16% lower at 1.4 million carats. Recovered grades were 22% higher at 2.23 carats per tonne.

Mountain Province says restarting production during one of the coldest months of the year affected equipment availability. The operation also experienced manpower issues, and has had to start a recruitment drive for relief equipment operators to “counter the unpredictability of staffing levels.”

On the positive side, the company reported a sales price per carat of US$71 for the quarter – nearing the pre-pandemic first quarter 2020 price of US$75 per carat. Sales revenue totalled $54 million (US$42.7 million) from 602,773 carats sold. The company noted that on a like for like price book basis, its current average diamond value is now higher than in the first quarter of 2020.

"The impact of the COVID-19 outbreak at the mine during the quarter was very unfortunate, particularly with all the additional safety protocols and avoidance procedures that were in place,” said Mountain Province president and CEO Stuart Brown in a release.

“This highlights the ease with which the virus can spread. Pleasingly, the plant has continued to perform well and we are starting to catch up on the carat production deficit. This together with the continued price increases seen as well as the relative stability in the markets, is encouraging. With global vaccination rates increasing, we're beginning to see a path to a return to normalcy, and with it the potential for continued diamond market recovery."

The company has scheduled a May 13 conference call to discuss results for the quarter, with its earnings release slated for May 12 after market close.