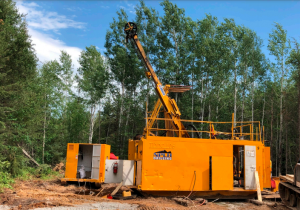 These two intercepts are now interpreted to lie along a shear zone – called Zone #9, which, based on host rock similarities, sulphide associations and similar gold grades and widths, may be connected to the West Deep zone, down-dip of Zone #9, which is currently defined down to 940 vertical metres.

In a release, R. David Russell, Galleon Gold’s president and CEO, noted how this most recent discovery speaks to the near-surface potential at the property.

“These latest results are a major confirmation that larger and higher-grade gold zones can occur within 300 metres of the surface. The robust grades and widths to the mineralization in these areas will be key contributors in driving project economics at West Cache.”

The 15,000-metre exploration program underway at the project will now have two portions: one focused on infilling known gold zones to support an upcoming resource update and preliminary economic assessment (PEA), with the second aimed at exploring Zone #9 and identifying areas with similar potential.

According to the press release, “the high-grade nature of the recent discovery intercepts this close to the surface are not typical of the better known ‘infill areas’…”

Once a private placement, raising up to $8 million, is complete, Galleon plans to increase its core logging and sampling capacity, to handle an expanded exploration program.

The West Cache project lies along the Porcupine-Destor gold belt and is approximately 7 km northeast of Pan American Silver’s Timmins West mine and 14 km southwest of Newmont’s Hollinger mine.