Vancouver – Osprey Gold Development Ltd. (TSXV: OS) (OTCQB: OSSPF) is pleased to provide additional results from its exploration program at the […]
By Robert Seagraves May 16, 2019 At 7:03 pm 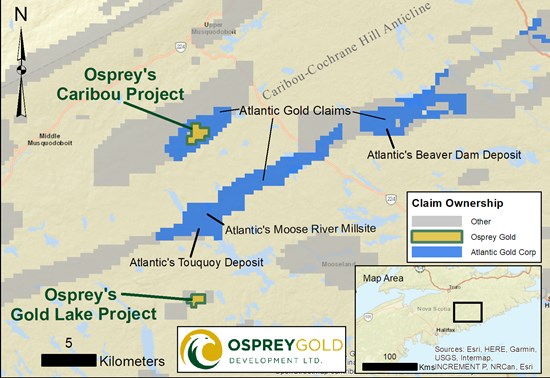 Caribou Project Location and claims. Courtesy Osprey Gold Development Ltd.[/caption] The trenching at Caribou included a total of four trenches with the best interval from the latest trench (18ELK-04) returning 1.33 grams per tonne gold ("g/t Au") over 13.80 metres, with multiple other anomalous zones in the surrounding sediments. These results provide additional support for the Company's concept that disseminated gold mineralization occurs in the sedimentary sequences surrounding historically mined high-grade veins at Caribou. This style of mineralization is similar to that which has allowed Atlantic Gold to build a successful mining operation in Nova Scotia. See the Company's news release dated August 22, 2018 or the Company's website (www.ospreygold.com) for more information on previous trench results. Relogging and sampling historic core last year at the Caffrey zone, southeast of Elk, with an emphasis on previously unsampled "wall rock" intervals, reported results including 70.57 metres grading 1.58 g/t gold, again highlighting the potential for broad zones of disseminated mineralization (see Osprey's news release dated November 20, 2018). Cooper Quinn, Osprey President commented: "These Elk Zone results continue to build upon the previous work we have completed at Caribou exploring for disseminated mineralization. We know there's significant higher grade mineralization on the project from the historic production and exploration, however especially in the Elk Zone, we're defining potentially significant broad horizons of lower grade mineralization at surface. The four trenches excavated and sampled so far at Elk define a 160 metre strike length of disseminated mineralization that is open in both directions. This is the style of mineralization for which we have specifically been exploring at Caribou and our other projects. It is similar in style to what Atlantic Gold is mining at the Touquoy open pit, and the other projects within the Moose River Consolidated project."