NEWFOUNDLAND – Anaconda Mining of Toronto must be pleased with the initial assay results for the recent drill program near the Argyle […]
By Marilyn Scales January 15, 2018 At 4:34 pm 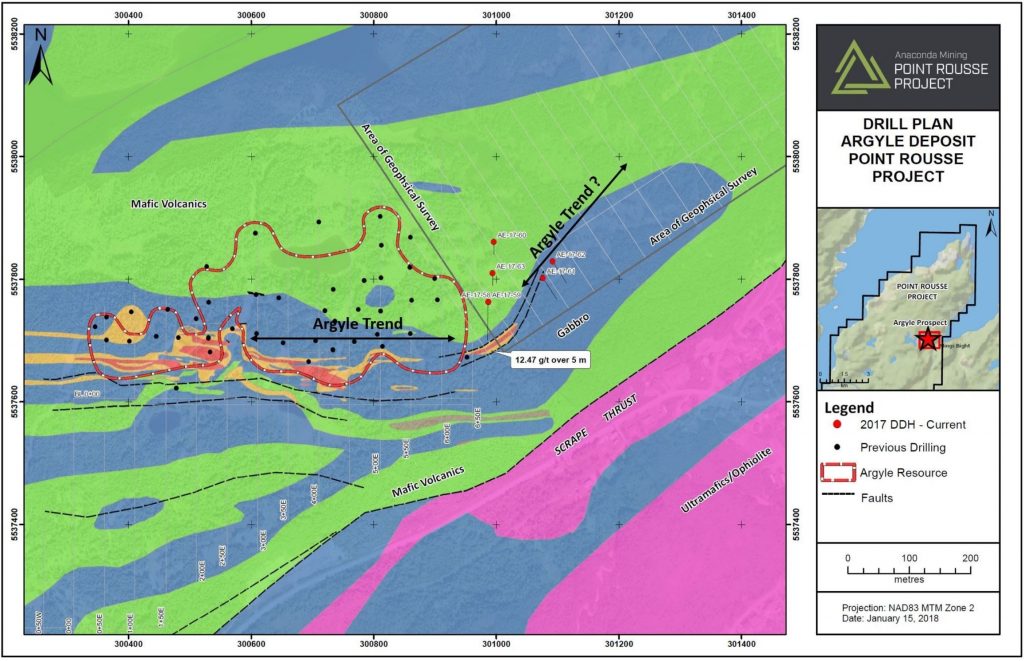 The drill plan at the Argyle deposit with 2017 holes shown in red. (Image: Anaconda Mining) The drill plan at the Argyle deposit with 2017 holes shown in red. (Image: Anaconda Mining)[/caption] NEWFOUNDLAND – Anaconda Mining of Toronto must be pleased with the initial assay results for the recent drill program near the Argyle gold deposit 4.5 km from the Pine Cove mill at the Pointe Rousse project. The best result was 12.5 g/t gold over 5.0 metres located 85 metres east of the current Argyle resources. Six holes were drilled. Two holes intersected mineralization and two others cut Argyle style alteration. The remaining two holes intersected nothing of interest because the Argyle Trend changes from a generally east-west trend to a northeast-southwest trend. To better understand and track the mineralization farther to the east, Anaconda plans to conduct a ground magnetic and IP survey before drilling resumes in that area. One of the two holes that intersected gold mineralization returned high grades: 12.47 g/t gold over 4.0 metres including 17.66 g/t over 3.50 metres and 0.83 g/t over 1.0 metre.. The other assayed 0.90 g/t gold over 1.0 metre and 1.68 g/t over 0.7 metre. Dustin Angelo, Anaconda’s president and CEO said, "On the heels of announcing the Argyle resource, we have discovered that the deposit continues at least another 85 metres east, and approximately 40 metres from surface, demonstrating the strike of the deposit is at least 15% greater than previously known.  Furthermore, the significant grade of this new intercept could indicate we are within another high grade shoot similar to what has been observed elsewhere in the deposit. We plan to test the high grade shoot concept in our next round of drilling." Complete information about the Pointe Rousse gold project is available at www.AnacondaMining.com.