NEWFOUNDLAND – Anaconda Mining of Toronto has the final assays from the 12-hole infill and expansion drill program at its Argyle target. […]
By Marilyn Scales March 22, 2018 At 4:24 pm 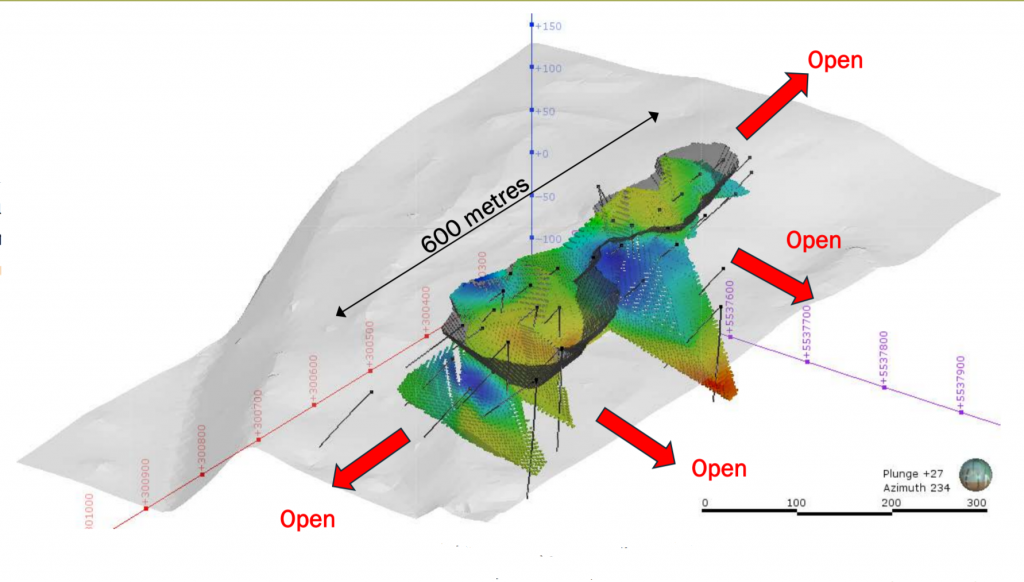 Grade distribution block model and conceptual pit for the Argyle deposit. (Image: Anaconda Mining)[/caption] NEWFOUNDLAND – Anaconda Mining of Toronto has the final assays from the 12-hole infill and expansion drill program at its Argyle target. Hole AE-17-74 intersected 7.87 g/t gold over 7.0 metres located 50 metres south of AE-17-58 that returned 12.47 g/t over 5.0 metres. Both holes are located 85 metres east of previous drilling at Argyle. The company notes that the zone is fault bounded, occurs at a shallow depth, and has a relative elevation indicating that the plunge is shallower than typically found at Argyle. Consequently, Anaconda believes that this high grade zone may continue to the northeast and southwest. Future drilling will investigate this. A second high grade zone was intersected by hole AE-18-73 – 8.86 g/t gold over 2.0 metres less than 15 metres from the surface. This hole was drilled outside the area covered by the current resource. The Argyle zone has an indicated resource of 543,000 tonnes grading 2.19 g/t and an inferred resource of 517.000 tonnes grading 1.82 g/t gold. The estimates were made using a 0.5-g/t cut-off and a 12-g/t capping factor. Anaconda also traced gold mineralization north of the Argyle zone. Hole AE-18-67 returned 2.09 g/t gold over 3.2 metres, including 4.10 g/t over 1.1 metre. Hole AE-18-68 tested 1.71 g/t gold over 1.0 metre and 1.38 over 0.75 metre. The Argyle deposit is located 4.5 km east of Anaconda’s Pine Cove mill. Find more information at www.AnacondaMining.com.