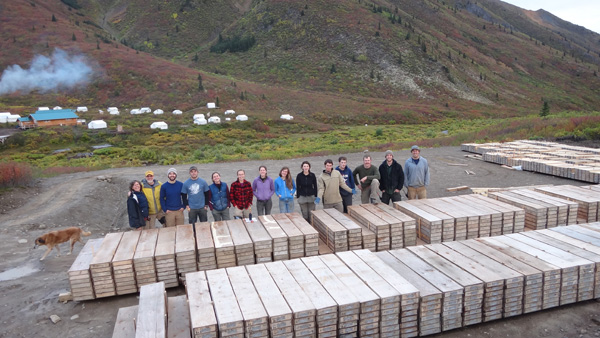 The core shack crew. Courtesy of ATAC Resources.[/caption] Highlights “With our maiden resource in hand, we are very pleased to establish the expansion potential at the eastern end of the Conrad Deposit. The first three holes confirm that exceptional grades continue along strike at the Middle Zone and identify a predictable, easterly trending zone of near-surface mineralization within and adjacent to the eastern end of the resource open pit,” commented Julia Lane, ATAC’s VP of Exploration. “Two drills continue to focus on extending mineralization at both Conrad and Sunrise, while three additional drills continue to target gold mineralization on the Orion Project.” Conrad Deposit Drilling at the Conrad Deposit was initiated to expand upon ATAC’s recently announced maiden Mineral Resource. The initial 2018 phase of drilling targeted the 650-850 fault corridor where structurally controlled high-grade gold, associated with brittle faulting, was identified in a siliciclastic unit that returned values including 12.50 m of 20.78 g/t gold in OS-17-238. Hole OS-18-262 stepped out 40 m east of OS-17-238 and intersected two zones of near-surface gold mineralization associated with the 650-850 fault corridor. This hole intersected 18.29 m of 1.74 g/t gold starting at the bedrock surface, with an additional zone returning 13.89 m of 4.14 g/t gold from 66 metres down hole. High-grade, strata controlled limestone hosted mineralization was also intersected in OS-18-262 at depth and along strike from the Middle Zone, returning 23.59 m of 9.50 g/t gold (including 7.50 m of 22.87 g/t gold). This interval is located near the contact with the siliciclastic unit. All three intersections within OS-18-262 occurred outside the boundary of the Conrad Mineral Resource. Holes OS-18-261 and OS-18-263 stepped out 45 and 100 m east of OS-17-257, respectively. Both holes were drilled to test the eastward extension of near-surface mineralization intersected in OS-17-257 (12.19 m of 9.44 g/t gold) and OS-17-259 (25.91 m of 5.44 g/t gold). OS-18-261 intersected 3.05 m of 10.50 g/t before it was abandoned short at 47.65 m, short of its target, due to drill-pad complications. The target area of this hole has been re-drilled and results are pending. OS-18-263 intersected a broad zone returning 64.01 m of 1.55 g/t gold located 90 m to the east of the Conrad resource boundaries. This intersection is along trend of mineralization in holes OS-17-257, OS-17-259 and OS-18-261. The result confirms a continuous trend of near-surface mineralization that remains open on the eastern side of the Conrad Deposit. Hole OS-18-263 also intersected a deeper zone consisting of 12.19 m of 5.27 g/t gold within a fault bounded slice of limestone. Diamond drilling of the Conrad Deposit and the Sunrise Deposit is ongoing. Please see ATAC’s website www.atacresources.com for updated Conrad Deposit figures.