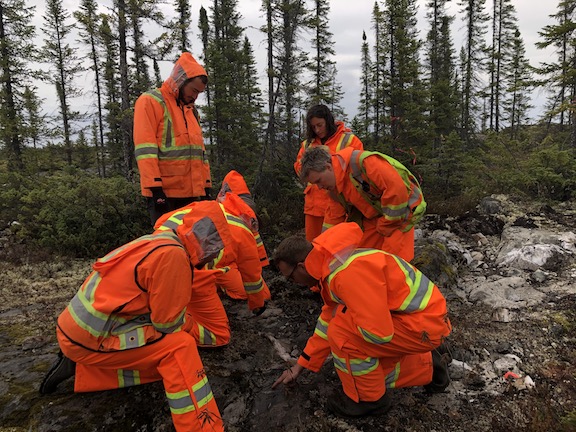 Azimut Exploration's Elmer gold project, in Quebec's James Bay region. Credit: Azimut Exploration[/caption] QUEBEC – Having completed its originally planned 6,000-metre, 30-hole drill program at its wholly-owned Elmer project, Azimut Exploration is expanding the campaign to 10,000 metres to continue drilling the main target there and to test previously identified targets. A total of 6,399 metres have been completed so far at Elmer, located 285 km north of Matagami in the James Bay-Eeyou Istchee region of Quebec. Although assay results from the program are still pending, Azimut says visual observations from several holes support the expanded program. Those observations include significant quartz veining and pyrite, significant associated alteration, and the presence of native gold grains. The company is drilling five main target areas located within a 2.5 by 1-km prospective corridor at Elmer, with the first phase of drilling testing targets down to 200 metres depth. Drilling has focused on the ELM-1 target area, where the company's Patwon discovery returned 102 metres of 3.15 g/t gold, including 20.5 metres of 10.1 g/t gold, in January. Azimut has pointed to the gold results as the most significant in the James Bay region since the discovery of Éléonore in 2004. After pausing exploration in late March due to the coronavirus pandemic, Azimut resumed exploration at Elmer with two drill rigs in May. The junior says it has implemented a strict protocols for safe operation during the pandemic, which have been reviewed by the Cree Nation government. For more information, visit azimut-exploration.com.