QUEBEC – Eldorado Gold has announced the discovery of a new zone of gold mineralization, the Ormaque zone, at its Lamaque gold […]
By Magda Gardner January 16, 2020 At 3:15 pm 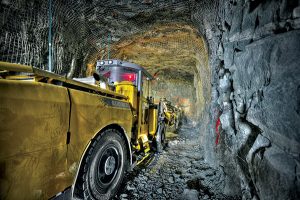 Underground equipment at Lamaque. Credit: Eldorado Gold[/caption] QUEBEC – Eldorado Gold has announced the discovery of a new zone of gold mineralization, the Ormaque zone, at its Lamaque gold operations. Drill highlights include: The Ormaque zone is located within a previously undrilled gap in mineralization between the historic Sigma deposit and the Triangle deposit currently being mined.  The zone is close to the proposed ramp which would link the Triangle underground mine to the Sigma mill. In the latter half of last year, Eldorado completed 13 drill holes over an area of 250 metres by 300 metres; assays for seven have now been received. The drilling completed thus far has traced mineralized zones to a depth of 200 metres to 500 metres below surface; Ormaque remains open and drilling is ongoing. The Lamaque mine achieved commercial production at the end of March; last year the asset produced a total of 113,940 oz. of gold with the company currently evaluating a 50% expansion of the mill to 2,500 t/d. The release of an associated preliminary economic assessment has been delayed to incorporate Ormaque in the study. The report is expected to outline three potential projects to boost production: Sigma mill upgrades, development of a decline from the mill to the Triangle deposit and construction of a paste plant to provide a tailings disposal solution. In December, Eldorado closed two transactions that increase its eastern Abitibi holdings: it invested $4 million in QMX Gold and now holds a 19.99% stake in the company and executed an option agreement with Sparton Resources to earn up to a 75% initial interest in the Bruell project, 35 km east of Lamaque. “The discovery of the Ormaque zone further confirms the geological prospectivity of our property and the tremendous potential we see at Lamaque,” George Burns, Eldorado’s president and CEO said in a release. “Additionally, the transactions demonstrate our commitment to growing our asset base in Quebec and increasing our exposure to early-stage exploration in the eastern Abitibi.” Eldorado acquired a 100% interest in the Lamaque operations in July 2017 and poured first gold from the project in December 2018. For more information, visit www.EldoradoGold.com.