GOLD: Eldorado on track to reopen Lamaque next year 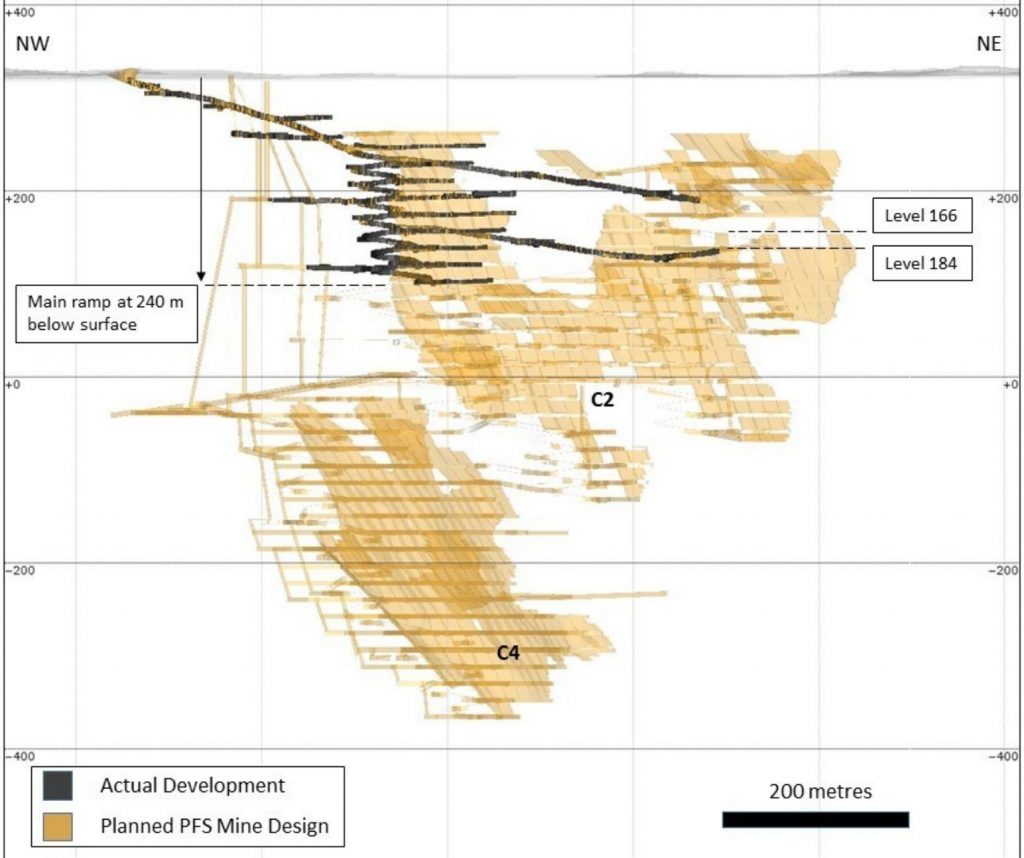 Lamaque underground development to June 20, 2018. (Image: Eldorado Gold)[/caption] QUEBEC – Vancouver’s Eldorado Gold Corp. says mill refurbishment and underground development at the Lamaque gold project in Val d’Or are both ahead of schedule in preparation to resume commercial production in early 2019. Underground development is averaging over 20 metre per day, and the main ramp has now reached a depth of 240 metres below surface. Ore is being processed through a nearby toll mill until the Sigma mill comes online. New electrical switchgear has been purchased for the 2,200-t/d Sigma mill. The main mill motors have been refurbished, and the carbon-in-pulp tanks have been refurbished or replaced. Eldorado says the mill will have excess capacity beyond what is needed to treat ore from the Triangle deposit. The company hopes to treat ore from other nearby projects, eventually expanding throughput to 5,000 t/d by installing an additional grinding mill. The exploration program is focused on the lower part of the Triangle deposit and other targets along strike and down dip from the Parallel deposit. Three new zones – C8, C9 and C10 – have been delineated at Triangle. Drilling them returned results such as 2.8 metres at 125.45 g/t gold and 1.8 metres at 8i73.96 g/t. Step-out drilling in zone C7 returned 3.4 metres at 7.47 g/t and 4.3 metres at 7.68 g/t. A  step-out intercept 125 metres down dip from the nearest previous intercept at the Parallel deposit returned 3.5 metres at 27.62 g/t gold. Eldorado is planning 10,000 more metres of drilling in the lower Triangle zone in hopes of expanding the resource. Underground, the company is planning 10,000 to 12,000 metres of drilling aimed at upgrading the 686,000 oz. of gold in the inferred resource to the measured and indicated categories. More details of the exploration program are available at www.EldoradoGold.com.