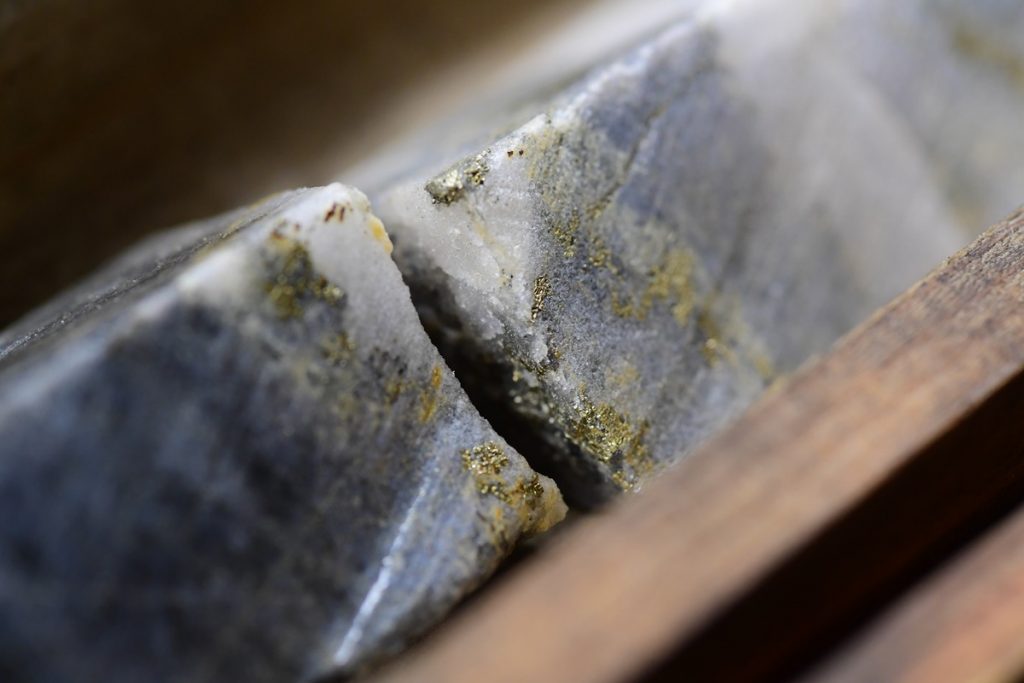 Visible gold in core from First Mining Gold's Goldlund project in Ontario. Credit: First Mining[/caption] ONTARIO – Thirteen new drill holes completed in the main zone at First Mining Gold's Goldlund project, 60 km northeast of Dryden, continue to define mineralization and support the potential to expand resources. Highlights include: The holes, drilled in the the northeast portion of the main zone, have confirmed continuity of higher-grade mineralization over 400 metres of strike, with mineralization open in both directions. Drilled at a 50-metre spacing, First Mining says the holes both defined mineralization in Zone 2 of the deposit, and identified narrow (up to 7 metres) parallel mineralized zones between Zones 2 and 3 that could add new areas of mineralization to the resource. In all, 46 holes totalling 8,588 metres have been completed at the main zone at Goldlund as part of the 2019-20 drill program. The Archean lode gold project hosts an indicated resource of 12.9 million tonnes grading 1.96 g/t gold for 809,200 oz. Inferred resources add 18.4 million tonnes grading 1.49 g/t gold for 876,954 oz. In a deal announced last month, Treasury Metals is acquiring the 285.7-sq.-km project in return for 130 million shares plus 35 million warrants, a 1.5% net smelter return royalty, and a milestone $5-million payment in order to combine it with its Goliath property, 2 km southwest. The acquisition is expected to close in August, after which First Mining will have the right to appoint three directors to Treasury's board. “Drilling at Goldlund continues to return strong results, supporting the potential for resource growth at the Main zone,” said Greg Ferron, CEO of Treasury Metals, in a release. “We are excited to close the Goldlund gold acquisition in mid-August as we positively integrate the two projects and create a district-scale opportunity within Treasury Metals. These results demonstrate the growth potential from the regional consolidation within this multi-million ounce gold district in Ontario.” Goliath holds measured and indicated resources totalling 16.2 million tonnes grading 2.29 g/t gold for 1.1 million oz., plus inferred resources of 2 million tonnes grading 3.43 g/t gold for 330,100 oz. In other news, First Mining recently announced a US$22.5-million streaming deal with First Majestic Silver to advance its Springpole project in Ontario. First Majestic will have the right to purchase 50% of the silver produced at the project, for which a prefeasibility study is expected to be released in early 2021. For more information, visit firstmininggold.com or treasurymetals.com.