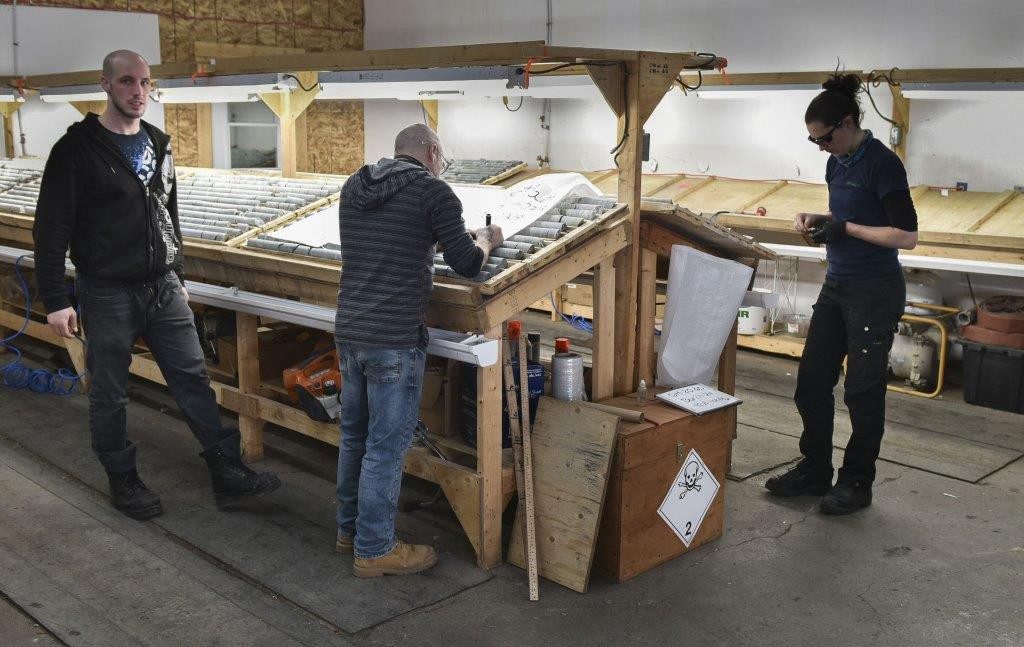 Chevrier core shack Credit: Genesis[/caption] QUEBEC – Genesis Metals has released assay results for four holes completed at its 290-sq.-km Chevrier gold project near Chibougamau. The drill highlights include 19.7 metres of 1.36 g/t gold starting at 74.6 metres, 7.4 metres of 1.79 g/t gold starting at 223 metres as well as 3 metres of 3.99 g/t gold. The first two intercepts include higher-grade intervals: 1.2 metres of 10.2 g/t gold and 1 metre of 8.92 g/t gold, respectively. According to the company, the most recent exploration program at the site focused on improving the drill definition within the existing resource area and testing for higher-grade plunging shoots within the Chevrier Main deposit. The four holes in the release were completed in the southwestern part of the Main deposit. As part of its first-phase 2020 drill program at Chevrier, Genesis drilled a total of nine holes – assays for five are still pending. The company plans to release details on its second phase of work for this year – this will include trenching and drilling - once all of the outstanding assays are analyzed. A surface exploration program is also planned for June, which will assess target areas outlined as a result of last year’s property-wide glacial till survey. The road-accessible Chevrier property lies within the eastern portion of the Abitibi greenstone belt and covers a 15-km-long section of the Fancamp deformation zone, where gold mineralization is associated with high strain zones. Chevrier includes four parallel major structural breaks, with 23 gold targets and a total of over 20 km of untested prospective strike. Current resources at the site are made up of the Main and East zones, both of which include open-pit and underground portions. The Main zone open-pittable resources include 6.6 million indicated tonnes at 1.39 g/t gold for a total of 295,000 oz. with a further 1.3 million inferred tonnes grading 1.35 g/t gold totalling 56,000 oz. The underground component at the Main zone consists of 1.9 million indicated tonnes grading 1.64 g/t gold and 4.6 million inferred tonnes at 1.33 g/t gold for a total of 298,000 gold oz. across the underground resource categories. The East zone features 311,000 inferred tonnes in the open-pit classification grading 1.53 g/t gold for a total of 15,000 oz. and 732,000 inferred tonnes in the underground category at 1.19 g/t gold totalling 28,000 oz. Chevrier is 20 km northeast of the 3.2-million oz. Nelligan gold discovery, currently held by Iamgold and Vanstar Mining. Genesis Metals is part of the Discovery Group of companies. For more information, visit www.GenesisMetalsCorp.com.