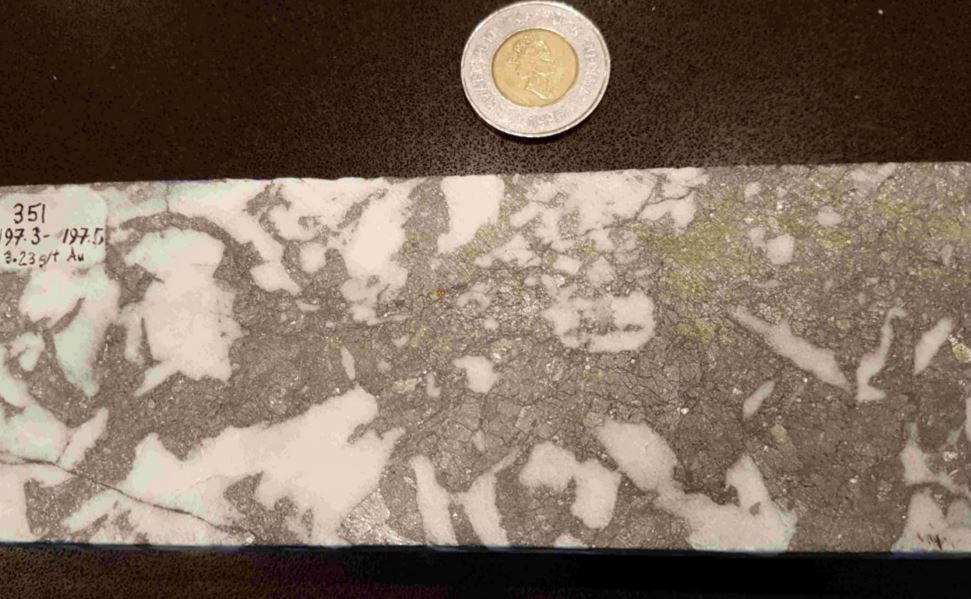 Core from a quartz arsenopyrite breccia vein in the Central structure of the 3 Aces project. (Image: Golden Predator Mining) Core from a quartz arsenopyrite breccia vein in the Central structure of the 3 Aces project. (Image: Golden Predator Mining)[/caption] YUKON – Golden Predator Mining Corp. of Vancouver says its 2018 drill program at the 3 Aces gold project successfully extended the mineralization in the Hearts zone. Continuity has been confirmed 500 metres down dip and 220 metres along strike from the zone’s discovery outcrop. The zone remains open in all directions. The company drilled seven holes, all of which cut the structures where they were predicted. Excellent widths and localized high grades were confirmed. These structures are probably expressed as surface outcrops on the 4.5 km Hearts-Clubs corridor and the 13.5 km2 Central Core area. One of the most interesting holes was 3A18-352 that returned 0.83 g/t gold over 30.2 metres beginning about 115 metres below surface and 2.88 g/t over 13.4 metres beginning at 203 metres. Within those intercepts were several high grade inclusions (in order of their descending depths): 4.31 g/t over 3.5 metres, 11.55 g/t over 1.0 metre, 6.56 g/t over 5.75 metres, 31.52 g/t over 0.9 metre, and 14.77 over 0.5 metre. Golden Predator executive chairman William Sheriff said, “Confirming the continuity and mineralization of the structures down dip and on strike, right where we projected them to be, is a game changer in terms of demonstrating the size potential of the 3 Aces project.” More information about 3 Aces is posted at www.GoldenPredator.com.