TORONTO – Colombia-focused Gran Colombia Gold has invested $14 million in a private placement in its recent spinoff, Caldas Gold, to fund […]
By Alisha Hiyate July 2, 2020 At 2:25 pm 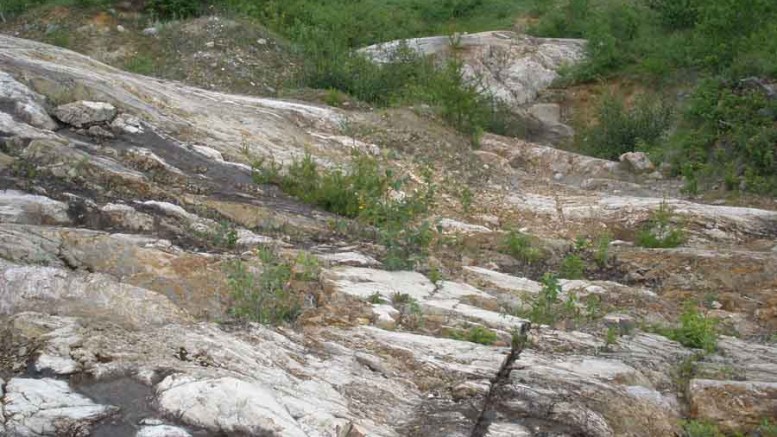 An outcrop at the Juby gold project in Ontario. Credit: Temex Resources An outcrop at the Juby gold project in Ontario. Credit: Temex Resources[/caption] TORONTO – Colombia-focused Gran Colombia Gold has invested $14 million in a private placement in its recent spinoff, Caldas Gold, to fund the acquisition of a project in Ontario's Abitibi greenstone belt. In a deal announced in May, Caldas Gold is acquiring the Juby project, 100 km southeast of Timmins, from South American Resources Corp. (SARC). The private company has an agreement to acquire the project from Pan American Silver subsidiary Lake Shore Gold. Also part of the deal is a 25% interest in the Knight JV with Lake Shore, which is adjacent to Juby. In return for the assets, SARC will receive 20 million Caldas shares, and Caldas will also make the final payments on the projects to Lake Shore. US$9.5 million is owed to Lake Shore to secure the 100% interest in Juby, with another US$500,000 required to close the Knight JV interest. Juby is an advanced exploration-stage gold project, with 1.1 million indicated oz. gold contained in 26.6 million tonnes at 1.28 g/t gold. Inferred resources add 2.9 million oz. gold in 96.2 million tonnes grading 0.94 g/t gold. Caldas operates the Marmato mine in Colombia, which produced 25,750 oz. gold in 2019. The company, which began trading in February, is currently advancing a prefeasibility study for an expansion of the underground mine. After being issued 7 million shares at $2 apiece in the private placement, Gran Columbia currently owns 77% of Caldas Gold. When the acquisition of SARC is closed on July 2, it will hold 57.5% of the company. Gran Colombia recently made a failed bid for Guyana Gold in an effort to create a larger South America-focused gold producer. For more information, visit grancolombiagold.com or caldasgold.ca