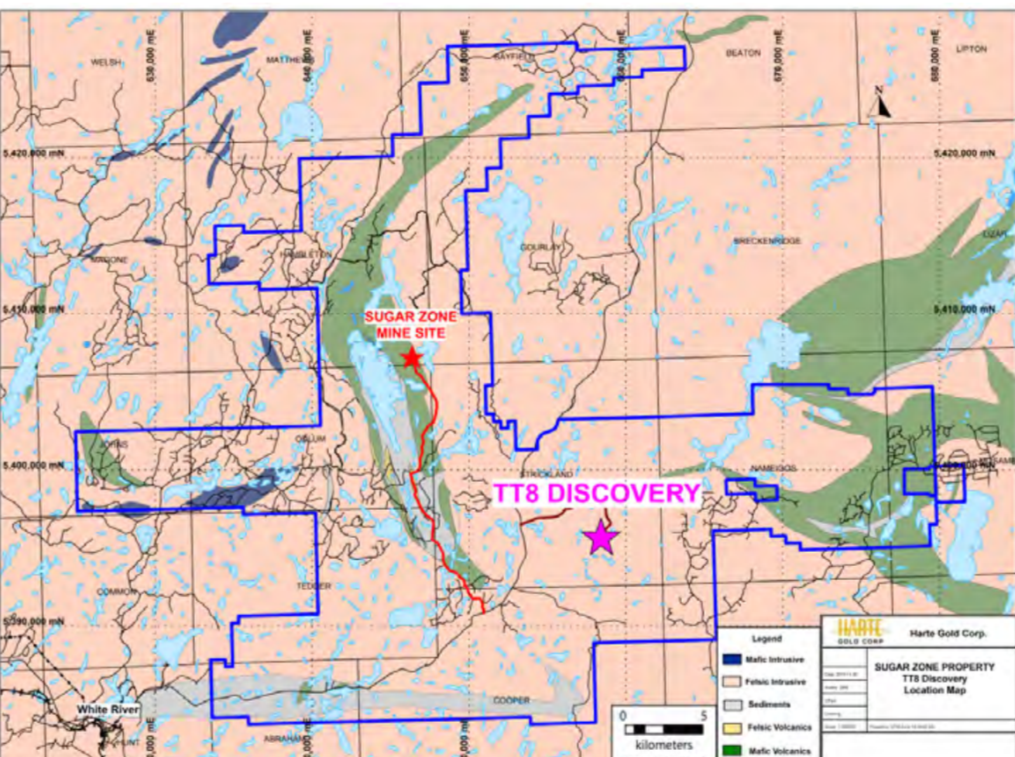 Sugar Zone property and TT8 discovery location Credit: Harte Gold[/caption] ONTARIO – Harte Gold has reported a new high grade gold showing at the Sugar Zone property, the TT8 Discovery, 17 km southeast of its Sugar Zone mine in northern Ontario. Based on 17 chip sample assays, gold grades from this new zone range from 11.1 g/t to 247 g/t. The samples were collected over a 40 metre strike length. The TT8 Discovery currently comprises of a vein 5 cm to 30 cm wide. Sampling of the hangingwall and footwall returned gold grades of up to 2.64 g/t, indicating potential for a greater width of the mineralized zone. According to the company, surface gold grades from the TT8 zone are some of the highest returned from the Sugar Zone property to date. This discovery will be the main focus of Harte’s exploration efforts going forward as part of its strategy to identify additional mill feed sources. Follow up diamond drilling is planned for the area; expected to start in January. Initial work is planned to test the down dip potential. Based on assay results, drilling to test the strike extent would follow. The discovery is interpreted as an eastern extension of an existing greenstone belt. Harte Gold is currently ramping up its Sugar Zone mine, expected to produce 24,000 oz. to 26,000 oz. this year at all in sustaining costs of US$2,000 to US$2,200 per ounce. The company is updating its mine plan and guidance for 2020. For more information, visit www.HarteGold.com.