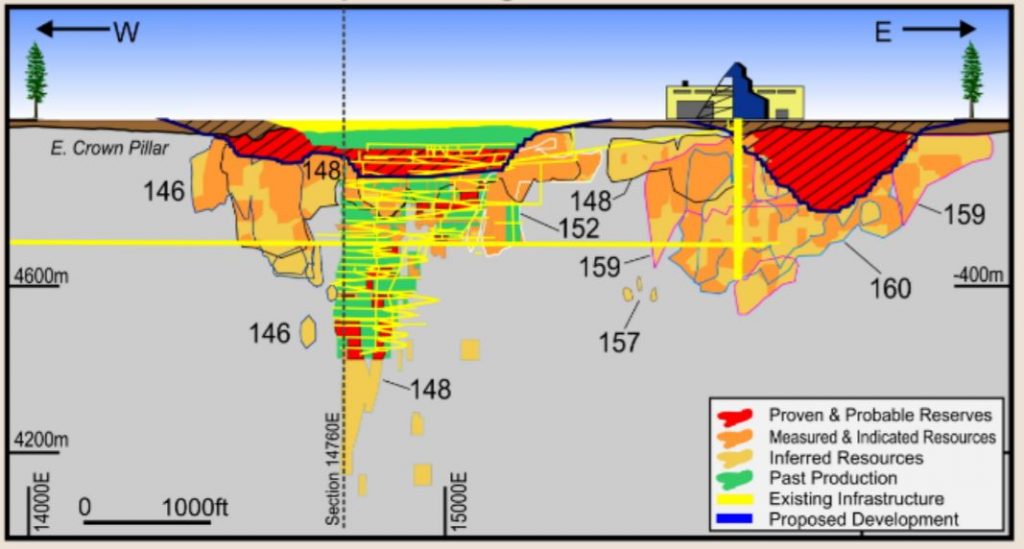 A composite longitudinal section of the Casa Berardi gold mine. (Image: Hecla Mining Co.)[/caption] QUEBEC – Hecla Mining Co. of Coeur d’Alene, Idaho, has completed its recent exploration and definition drilling programs at the Casa Berardi East gold mine 95 km north of La Sarre. The East mine has a history of high grades, but access to the area was only re-established earlier this year. Drilling at the 148 zone targeted the down plunge of current development. Additional high grade lenses from the 148 to 160 zones were tested. Many of the holes had visible gold, and the zones are likely open along strike at and depth. Results from the 148 zone exhibited significant widths and grades two to three times higher than the average underground grade at Casa Berardi, said Hecla president and CEO Phillips S. Baker, Jr. “Given this is in the area of higher grades where the mine started 30 years ago, infrastructure is close, so production could start in about a year and could continue for a number of years as the mineralization appears to continue,” he said in a news release. Drill core intersected several 1-oz-plus sections including these: Hecla is the 100% owner of the Casa Berardi project and says it has produced about 1.9 million oz. of gold since it was commissioned in 1988. The property was acquired in 2013 when Hecla acquired Aurizon Mines. More information about Casa Berardi is available at www.Hecla-Mining.com.