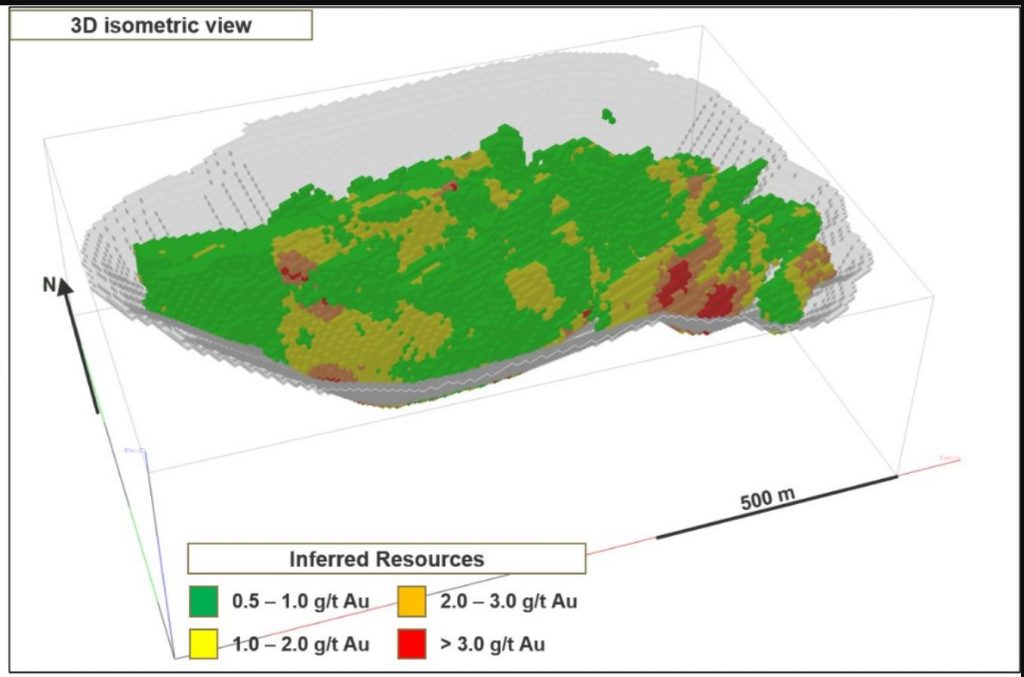 A 3-D isometric view of the Nelligan gold deposit. (Image: Iamgold Corp.)[/caption] QUEBEC – Iamgold Corp. of Toronto reports the first resources numbers – with 3.2 million oz. of gold – at its Nelligan joint venture project 60 km southwest of Chibougamau. The project is owned 51% and operated by Iamgold, and 49% owned by Vanstar Mining Resources. The estimate is for the inferred category, compliant with National Instrument 43-101. There are 97.0 million tonnes averaging 1.02 g/t gold. The estimate includes four zones, with the recently discovered Renard zone being the largest. Renard has a strike length of over 1 km and a thickness exceeding 100 metres. The low grade gold mineralization is associated with a fine pyrite mineralization hosted in an altered sequence of mostly metasedimentary rocks. Mineralization is open along strike to the west and at depth. SGS Quebec conducted preliminary metallurgical tests in support of the resource estimate. The results suggest gold recovery would be about 92% using a sulphide flotation circuit followed by cyanidation and carbon-in-leach, including cyanide leaching of the flotation tailings. Iamgold can increase its interest in the Nelligan gold project by a further 24% by spending $2.78 million in cash and producing a 43-101 technical report before March 2022. A further 5% can be earned by completing a feasibility study, giving Iamgold an 80% interest and Vanstar 20%. The Nelligan property is only 15 km south of Iamgold’s Monster Lake project. Visit www.Iamgold.com and www.VanstarMining.com.