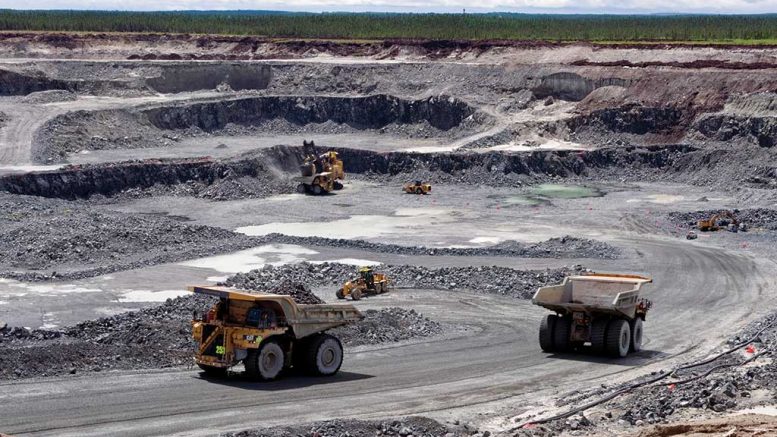 Kirkland Lake Gold's Detour Lake gold mine, in Ontario. Credit: Kirkland Lake Gold[/caption] TORONTO – Kirkland Lake Gold has released results from 17 new drill holes at its Detour Lake mine, 300 km northeast of Timmins, which it says have extended mineralization at the Main pit and 58 North zone. The holes, totalling 7,176 metres, are part of a 250,000-metre drill campaign to be completed by the end of 2021. The drilling is aimed at upgrading reserves and resources and updating the mine plan. This is the first exploration program to be carried out by the company at the project, which it acquired through a takeover of Detour Lake completed in January. “A key driver in our decision to acquire Detour Gold was the potential to substantially increase mineral reserves at Detour Lake mine in support of future production growth and improved unit costs,” said Tony Makuch, president and CEO of Kirkland Lake, in a release. He added that while the exploration program was impacted by COVID-19, the exploration team was able to ramp up the program and generate encouraging results in a short period of time. Before the end of the year, Kirkland Lake expects to complete 70,000 metres of drilling at Detour Lake. Drilling in the Saddle zone near the Main pit hit broad zones of mineralization with good open pit grades. At depth, the zone returned significantly higher grades, pointing to the potential for underground mining beneath the main pit. Drilling in this zone targeted the area along the Detour Mine trend between the Main pit and the West pit, where there has been little drilling to date. Highlights included 121 metres of 1.41 g/t gold, including 3.5 metres of 16.33 g/t gold in hole DLM-20-004, located just east of the West pit. Hole DLM-20-008, located 350 metres east of hole 004 and near the west limit of the Main pit, returned 23.9 metres of 4.11 g/t gold and 37 metres of 1.77 g/t gold, including 3 metres of 14.73 g/t gold. Drilling in the North pit area, northwest of the Main pit, targeted a depth of 150 metres below surface, about 75 metres below current reserves and resources. Highlights there included 9 metres of 1.1 g/t gold and 5 metres of 1.76 g/t gold. The company believes there is excellent potential to add resources in this area, which lies along a separate structural trend 500 metres north of the Main and West pits, and where there has been limited drilling. Nine holes were completed at the 58 North zone, intersecting high-grade mineralization up to 175 km west of current resources. Drilling at the zone, which already hosts indicated and underground resources, returned highlights of 5 metres of 14.6 g/t gold, 13 metres of 11.7 g/t gold, and 8 metres of 5.9 g/t gold. In the release, Makuch noted 58 North has potential as a standalone underground, high-grade mine. Kirkland acquired Detour Gold in a deal valued at $4.9 billion that closed in late January. A law suit related to the acquisition has been filed in U.S. Federal Court, alleging the company artificially inflated its share price before the deal with misleading statements about its risks and via its all-in sustaining costs and reserve grade. The open pit Detour Lake mine has a 22-year mine life and produced more than 600,000 oz. gold last year. Kirkland Lake has also reissued its guidance for the year after withdrawing its original guidance in April due to COVID-19 related uncertainty, with expected production for the year down 10%. Instead of 1.47-1.54 million oz. of gold, the company now anticipates production of 1.35-1.4 million oz. this year. Most of the lower production is the result of the removal of the Holt complex in Ontario from Kirkland Lake's guidance for the year. All-in sustaining costs are now projected at US$790-810 per oz., down from U$820-840 previously - again largely due to the removal of the Holt complex, which is a higher-cost operation, from guidance. For more information, visit klgold.com.