ONTARIO – Kirkland Lake Gold continues to report exploration news, this time from its Macassa mine where drilling has extended mineralization to […]
By Magda Gardner December 11, 2019 At 12:32 pm 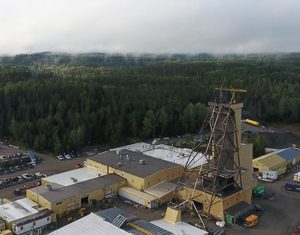 Macassa headframe Credit: Kirkland Lake Gold[/caption] ONTARIO – Kirkland Lake Gold continues to report exploration news, this time from its Macassa mine where drilling has extended mineralization to the east and infill work confirmed high grades outside of current resources. Highlights of step out work that tested the Amalgamated Break structure near its merge with the South Mine Complex include: Other highlights included: These intercepts were aimed at further extending the eastern portion of the SMC. Infill intercepts of note include: These intercepts were focused on infilling the eastern part of the SMC. Around the Amalgamated Break, these drill results intercepted mineralization 35 metres past its previously identified limits. Around the eastern portion of the SMC, the results extend high grade mineralization by 75 metres to the east. The infill results appear to confirm continuity of high grade mineralization identified previously. “Today’s results highlight the substantial exploration potential along the Amalgamated Break and further increase our confidence that we can significantly grow the SMC,” Tony Makuch, the company’s president and CEO commented in the press release. The Amalgamated Break is a largely untested structure which Kirkland Lake considers a prospective target area for mineral resource growth. Two high grade areas associated with the Break have been identified thus far. Kirkland Lake plans to continue work around the Amalgamated Break to test the extents of associated mineralization and will also focus efforts around the SMC. Underground development is ongoing for diamond drill platform construction. The Macassa underground mine started production in 1933 with increased production and improved grades in the last five years following the discovery of the South Mine Complex. The company is currently working on the 4,000 t/d #4 shaft project at the SMC, with the first phase expected to be completed in 2022. The project is expected to allow production growth to over 400,000 oz. per year at reduced all in sustaining costs. This year, Macassa is expected to produce 240,000 oz. to 250,000 oz. out of the company’s total production guidance of 950,000 oz. to 1 million oz. of gold. Operating cash costs are forecast at US$400 to US$420 per oz. from this asset. Current Macassa reserves stand at 3.9 million tonnes grading 21.9 g/t gold for a total of 2.25 million oz. For more information, visit www.KLGold.com.