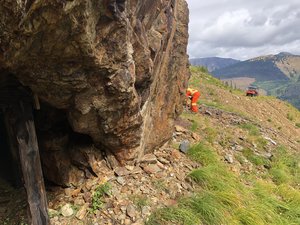 FG Gold project Credit: KORE[/caption] BRITISH COLUMBIA – KORE Mining has released assay results for six holes completed at its FG Gold project in the Cariboo region, which extend the Lower Zone discovery and further define the Upper Zone. Drill highlights include 52.5 metres of 1.1 g/t gold starting at 122.5 metres from the Lower Zone – this hole ended in mineralization. Notable intercepts from the Upper Zone include 11 metres of 10 g/t gold starting at 44 metres, 98 metres of 1 g/t gold from 24 metres as well as 51 metres of 1.6 g/t gold starting at 19 metres. “Our objective is to upgrade the current FG Gold resource, make down-dip discoveries and demonstrate the district scale of the FG Gold project,” Scott Trebilcock, the company’s CEO, said in a release. “Drilling is exceeding our expectations and with financing from Eric Sprott, we have extended the program to test an additional 2 km of strike on the known resource.” Trebilcock added that soil sampling and mapping is also underway along a 10-km-long stretch of the 20-km geochemical and geophysical trend at FG. The company has a 5,000-metre drill program underway at the site – additional assays are pending. Prior drilling at FG was done down to an average depth of 93 metres. In June, KORE announced non-brokered private placement, raising up to $7.5 million. The financing includes 6 million non-flow-through units and 1.5 million flow-through units. Eric Sprott has subscribed to the entirety of the non-flow-through component, for gross proceeds of $6 million – this tranche closed on July 22. The second tranche is expected to close by July 29. Prior to starting its 2020 drill program at the project, KORE completed a structural analysis of the site and re-interpreted the historical drill results. The company outlined potential for structurally-controlled and repeating zones of high-grade gold, in fold hinge regions of the deformed host rock. The drilling is intended to outline potential shoots within the mineralized zones. The 130-sq.-km FG Gold project is 100 km east of Williams Lake. FG Gold hosts an orogenic gold deposit, with an existing measured and indicated resource of 15.2 million tonnes grading 0.78 g/t gold for a total of 376,000 oz. and an additional 27.5 million inferred tonnes at 0.72 g/t gold totalling 634,900 oz. These are derived using a 0.5 g/t gold cut-off grade. For more information, visit www.KOREMining.com.