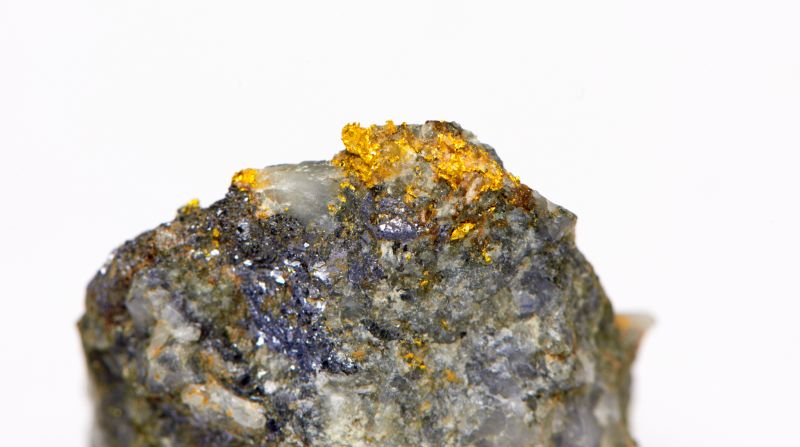 Visible gold from the Kenwest rock samples. Courtesy of Manitou Gold.[/caption] The samples were pulled from a recently completed surface bulk sampling program at the Kenwest property. While the permitting process for a larger underground bulk sample is ongoing, the Company elected to proceed with the collection of an initial 10 tonne bulk sample taken from surface in the vicinity of the very high-grade gold intersections that the Company drilled in 2011. At that time, the Company drilled a section of core that returned an assay of 53,700 g/t Au over 0.55m (see Company press release dated Feb 28, 2011). This intersection occurred at a depth of approximately 25m below surface. Gold mineralization at the Kenwest property is orogenic in nature and is largely confined to distinct northeast to southwest trending shear zones that have been filled with quartz veining and related alteration. Historic mining dating back to the early 1900s on the property has focused on the #1 and #2 shear zones. All of the Company's recent activity has targeted the #2 shear zone. The recent blasting was done along strike of the vein over a length of approximately 30 meters, beginning directly above the intersection in KW-11-26 and extending towards the northeast at depths of between 8-12 feet and 1.5 meters in width creating a small trench. A total of approximately 235 tons were blasted. During excavation of the blasted rock, the Company's contractors filled 40 steel drums (having capacity of 45 gallons each) with material from the vein and shear zone, resulting in the collection of approximately 10 tonnes of material sent for laboratory analysis. The Company's contractors observed conspicuous amounts of visible gold from near surface in a part of the vein located approximately 20 meters northeast of the section where drill hole KW 11-26 had encountered the above-mentioned high-grade intersection. Geological mapping, sampling and structural measurements undertaken during the sampling process will be incorporated into the existing geologic model for the zone in order to add to the Company's understanding on the controls of the high-grade gold zones, and to understand the relationship among the multiple areas of concentrated visible gold and co-hosted minerals. The blasted rock was not washed or sorted and was simply directly deposited into barrels as excavation progressed. The total representative sample of approximately 10 tonnes has been transported to SGS Laboratories in Sudbury and will be processed both there and at SGS Lakefield location, in order to provide a more definitive estimate of the vein system grade, as well as facilitate initial assessment of best procedures for mineral extraction. The remaining material has been stockpiled on site to allow for expedient access and further metallurgical testing. "This initial surface bulk sample is a big step towards establishing expected grade of the future underground bulk sample," stated Richard Murphy, CEO of Manitou Gold. "I am very optimistic about the pending results. The original high-grade discovery in hole KW-11-26 confirms that this area can host some spectacular grade gold material and I am anxious to see if this first bulk sample supports this potential on a larger scale. The results of this test work, once available, will provide inputs into how we proceed with work on site in advance of the planned underground bulk sample. Possibilities for the next stages of exploration at Kenwest include expanding on the surface drilling and blasting in order to produce a larger tonnage sample to test at a commercial mill, as well as diamond drilling to test our new understanding about the controls of the higher grade gold zones." The Company anticipates being able to release the assay results of this initial surface bulk sample in January.