NOVA SCOTIA – MegumaGold and Osprey Gold have entered into an agreement for a business combination with MegumaGold acquiring Osprey in an […]
By Magda Gardner March 24, 2020 At 3:46 pm 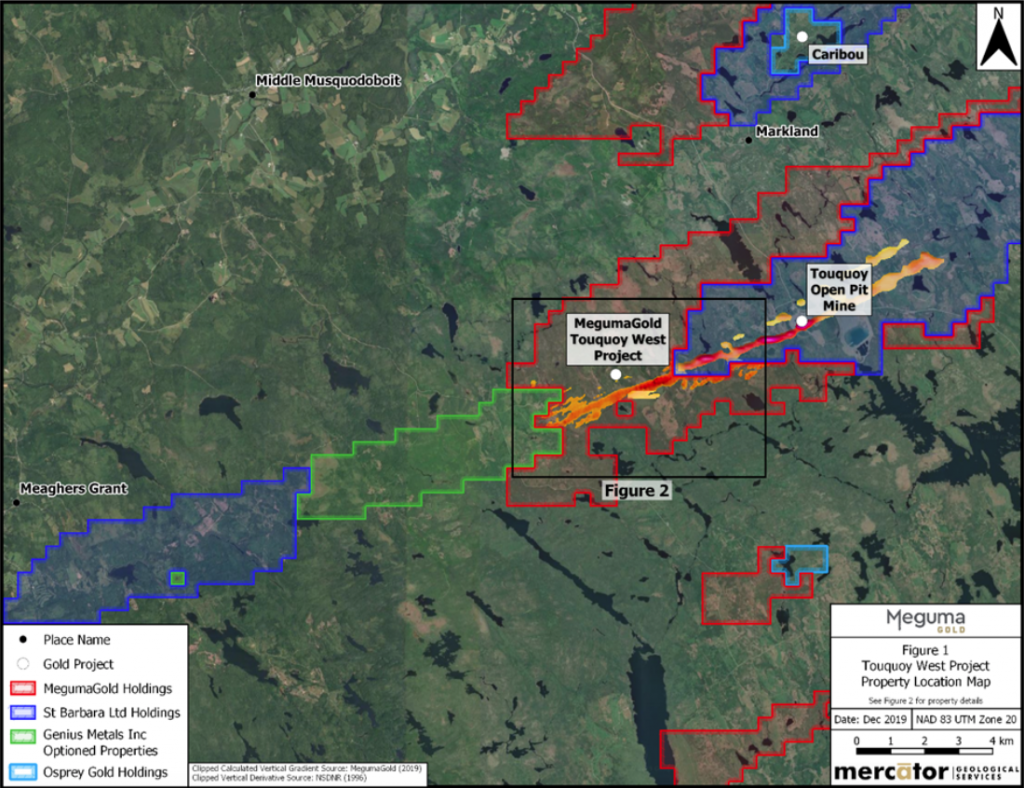 MegumaGold's Touqouy West property Credit: MegumaGold[/caption] NOVA SCOTIA – MegumaGold and Osprey Gold have entered into an agreement for a business combination with MegumaGold acquiring Osprey in an all-share deal worth an estimated $3.7 million, based on yesterday’s closing prices. MegumaGold holds a total of 1,071 sq. km of ground within Nova Scotia’s past-producing Meguma Terrain, covering 466 km of prospective anticlines within ten projects. The company is currently preparing drill campaigns for two properties and also defining regional targets. Osprey holds five properties in the district, its holdings are all contiguous with MegumaGold’s claims. The company’s main focus is its Goldenville past-producing project, with inferred capped near-surface resources of 1.2 million tonnes grading 3.02 g/t gold for a total of 120,000 oz. with a further 1.6 million tonnes at 3.35 g/t gold totaling 168,000 oz. inferred in the underground classification. “We believe this combination of assets is the logical next step in building a company optimally positioned to capitalize on the upside of the developing gold camp in Nova Scotia,” Theo Van der Linde, MegumaGold’s president, said in a release. “Combining Osprey’s assets of Goldenville and Caribou with MegumaGold’s developmental projects contained within its under-explored 107,000 hectare land position presents a compelling opportunity for our shareholders.” “Our vision is to build the leading explorer in Nova Scotia, developing a resource base through exploration on deposits across the Meguma Terrain where geology, access and infrastructure align and we believe that the combined entity and its personnel will be positioned to raise and deploy the capital to do just that,” added Cooper Quinn, Osprey’s president. As part of the proposed transaction, MegumaGold would acquire shares of Osprey at an exchange ratio of one MegumaGold share for every two Osprey shares outstanding; it anticipates issuing 36.7 million units. Osprey shareholders would own approximately 26.3% of the common stock of the combined company. Closing of the transaction is subject to bilateral due diligence and board, shareholder as well as third-party approvals. St. Barbara’s producing Touquoy open pit at the Moose River project is located approximately 10 km south of Osprey’s Caribou property and 4 km west of MegumaGold’s Touquoy West holding. For more information, visit www.MegumaGold.com or www.OspreyGold.com.