TORONTO – With the release of optimized mine plans for both its Rainy River and New Afton mines, New Gold is focusing […]
By Magda Gardner February 13, 2020 At 2:18 pm 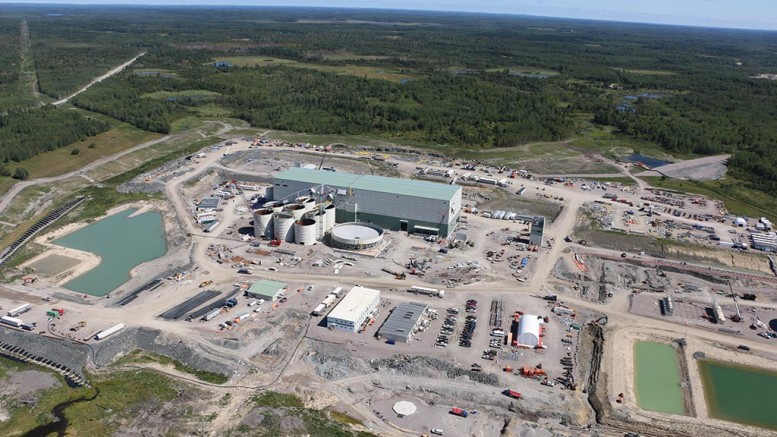 Rainy River mine Credit: New Gold[/caption] TORONTO – With the release of optimized mine plans for both its Rainy River and New Afton mines, New Gold is focusing on cash flow generation. The company also provided full-year financial results and issued guidance for 2020; operating results from 2019 were pre-released in January. This year, New Gold expects to produce a total of 465,000 oz. to 515,000 gold-equivalent oz. at all-in sustaining costs of US$1,260 to US$1,340 per oz.; in line with last year’s performance. At Rainy River, with a reserve reduction of 1.6 million oz., New Gold developed a mine plan to maximize returns with a shorter resulting mine life. The updated plan features average gold production of 289,000 oz. annually at AISCs of US$967 per oz. with a resulting net present value estimate, at a 5% discount rate, of US$421 million. The new plan involves a smaller open pit shell and an underground component starting up in 2022. “Over the past number of months we have evaluated numerous scenarios for the Rainy River mine and are pleased to release an updated life of mine plan that delivers a solid open pit and underground mine plan that positions the operation for profitability and free cash flow generation beginning in Q4 2020 that continues over the balance of the mine life,” Renaud Adams, the company’s CEO, said in a release. Last year, Rainy River produced 257,051 oz. at AISCs of US$1,630 per oz. This year, the mine is expected to churn out 240,000 oz. to 260,000 oz. at AISCs of US$1,470 to US$1,550 per oz. At New Afton, New Gold has focused on a self-funding development of the C-zone which will see lower production between 2021 and 2024 with the C-zone starting up in 2024 and extending mine life to 2030. The mine is now expected to generate an average of 260,200 oz. of gold-equivalent a year at AISCs of US$681 per oz. The associated net present value has been estimated at US$735 million, also at a 5% discount rate. “We have also released an integrated mine plan that optimizes the self-funded development of New Afton’s B3 and C-zone that could deliver significant free cash flow of more than US$1 billion over the life of the mine,” Adams added. This year, New Afton is expected to contribute 220,000 oz. to 250,000 gold-equivalent oz. at AISCs of US$940 to US$1,020 per oz. New Gold also released the results of underground exploration drilling at New Afton with gold and copper mineralization identified in a new area, the East Extension zone. Results to date traced this zone over an area of 300 metres by 40 metres with a down-dip component of 700 metres. Drill highlights include 108 metres of 1.82 g/t gold and 2.43% copper as well as 100 metres of 1.28 g/t gold and 2.37% copper. The company is planning follow-up drilling for the East Extension to extend the mineralization and define a mineral resource. For more information, visit www.NewGold.com.