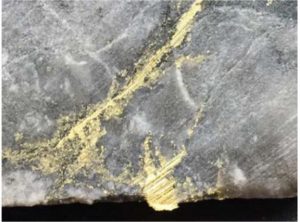 Windfall drill core Credit: Major Drilling[/caption] QUEBEC – Osisko Mining has released results from the completed Discovery 1 diamond drill hole, the longest diamond drill hole drilled to date in Canada. This hole reached a length of 3,467 metres and targeted down-plunge extensions of the gold zones at Windfall as well as the projected source of the deposit at depth. The most recent intersections of note from this drill hole include 96 metres of 1.05 g/t gold as well as 2.3 metres of 10.7 g/t gold and 4 metres of 5.25 g/t gold. Results from the final 200 metres of this hole are pending; assay results were also released last year. “Discovery 1 is a great success and achievement,” John Burzynski, the company’s president and CEO said in a release. “Successes include the include the discovery of the Underdog and Triple 8 extensions, the wide intercepts of anomalous gold values similar to those observed in the Lynx system, and now these new high value gold intercepts at depth. These results of the Discovery 1 hole show that the Windfall system is extensive with substantial room for potential growth.” Major Drilling Group International, which completed the drill hole, is one of the largest specialized drilling operators in the world. Current resources at Windfall stand at 2.9 million tonnes in the indicated category grading 8.17 g/t gold for a total of 754,000 oz. with additional inferred resources of 10.4 million tonnes at 7.11 g/t gold for a total of 2.4 million oz. The company’s current model for the Windfall deposit is of an outer shell and centre of a potential porphyry intrusion feeding the gold system at Windfall. For more information, visit www.OsiskoMining.com.