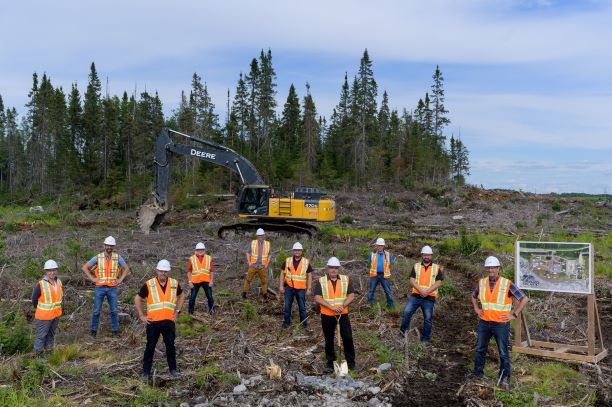 At the construction announcement for the Odyssey ramp at the Canadian Malartic mine in Quebec. Credit; Canadian Malartic Mine[/caption] QUEBEC – Joint-venture partners Agnico Eagle Mines and Yamana Gold will begin construction on an underground ramp at their Canadian Malartic open pit mine, 25 km west of Val-d'Or, in August. The Odyssey ramp is expected to take two years to build, and will eventually allow the JV to collect a bulk sample of up to 40,000 tonnes, to conduct more tightly spaced resource drilling, and further down the line, to mine the upper portions of the Odyssey and East Malartic zones. Construction on the portal is scheduled to begin in August, with ramp development beginning in the fourth quarter. The partners have also increased their exploration budget to $30 million from $25 million, based on positive drill results. The $5-million increase will allow the companies to drill another 17,000 metres; the partnership is targeting 126,000 metres of exploration drilling for the full year. The partners have so far defined underground indicated resources at Canadian Malartic of 11.9 million tonnes grading 2.16 g/t gold for 830,000 oz. of gold. Inferred resources add 127.7 million tonnes grading 2.34 g/t gold for 9.6 million oz. [caption id="attachment_1003740656" align="alignnone" width="550"] Canadian Malartic zones. Credit: Osisko Gold Royalties[/caption] Canadian Malartic, which produced over 660,000 oz. of gold last year, is 50% owned by Agnico Eagle and 50% by Yamana Gold. Osisko Gold Royalties has a 5% net smelter royalty on Canadian Malartic. As the original Osisko Mining, the company built the mine and put it into production, with Yamana and Agnico buying the asset in 2014. “We are extremely pleased to see the advancement of the partnership’s vision to explore and develop the underground resources on the Malartic property,” said Sean Roosen, chair and CEO of Osisko Royalties, in a release. “The geological endowment of this project continues to deliver for the partners and Osisko. We believe that Canadian Malartic Underground is well on the way to becoming another cornerstone asset for Osisko and we are keen to see the results of the aggressive exploration campaign on East Gouldie and the forthcoming development of the portal and ramp.” Exploration drilling in the second quarter focused on infill drilling at the East Gouldie zone, with 10 diamond drill rigs working to define and expand the underground resource. For more information, visit canadianmalartic.com.