GOLD: QMX closes in on resource update at Bonnefond 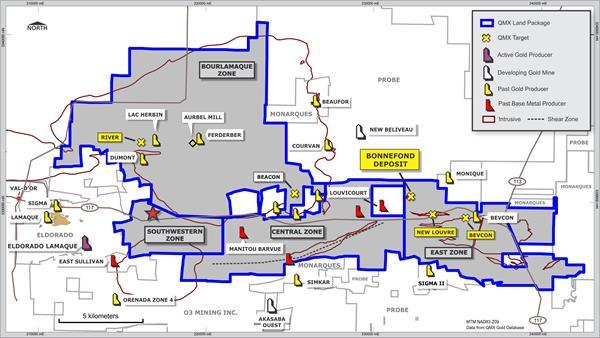 QMX Gold's land package in Val d'Or, Que. Credit: QMX Gold[/caption] TORONTO – Infill drilling at QMX Gold's Bonnefond deposit near Val d'Or, Que., continues to hit strong intercepts as the company prepares a resource update to be released this summer. The junior released assays from nine holes drilled in the eastern part of the deposit meant to test the extension of mineralized shears east of the Bonnefond intrusive, along 200 metres of strike. Hole 105A targeted a deep mineralized shear zone discovered by past operator Aur Resources in 1997. The historic hole cut 12.2 metres of 12.2 g/t gold starting at 850 metres depth, while Hole 105A hit the same shear zone 40 metres south and returned 15.4 metres of 4.98 gold from 775 metres depth. That interval included a shorter 1.2-metre section grading 32.78 g/t gold. Other highlights included 4.6 metres of 4.8 g/t gold (including 1.3 metres of 10.92 g/t gold) from 77 metres depth in hole 102; and 2.7 metres of 3.39 g/t gold starting at 570.5 metres in hole 106. The three highlighted holes were drilled closest to the Bonnefond intrusive. While the six other holes intercepted the shear system, alteration and mineralization were not as developed. “We continue to intersect excellent high-grade gold values at Bonnefond,” said Andreas Rompel, QMX's vice-president exploration, in a release. “This time we aimed at the individual shears and proved their prospectivity. This does not come as a surprise as shears are the conduit for gold-bearing fluids, however, the knowledge of the orientation of the shears and their conjugate fault sets is of the utmost importance to intersect them with diamond drill holes on a consistent basis.” Other recent highlights from Bonnefond include 101 metres of 2.31 g/t gold drilled last month in the central part of the deposit. After closing its exploration office in Val d’Or in March as a result of the coronavirus pandemic, QMX resumed drilling with two drill rigs on May 12 on the western part of the Bonnefond deposit. The drilling, which consists of a planned 3,800 metres, will be incorporated into a resource update this summer. The company completed about 14,400 metres of drilling earlier this year before provincial restrictions forced it to suspend exploration. After the resource update is complete, QMX will follow up with drilling on other targets at its extensive, 200-sq.-km Val d'Or land package this summer. Last year, the company released a maiden resource estimate for Bonnefond, with indicated resources of 4.8 million tonnes at 1.69 g/t gold for 258,700 oz. and additional inferred resources of 2.4 million tonnes at 1.87 g/t gold for 145,100 oz. For more information, visit www.qmxgold.ca.