TORONTO – RNC Minerals is making its status as a gold-focused company official, announcing the acquisition of a third gold project in […]
By Alisha Hiyate May 12, 2020 At 3:44 pm 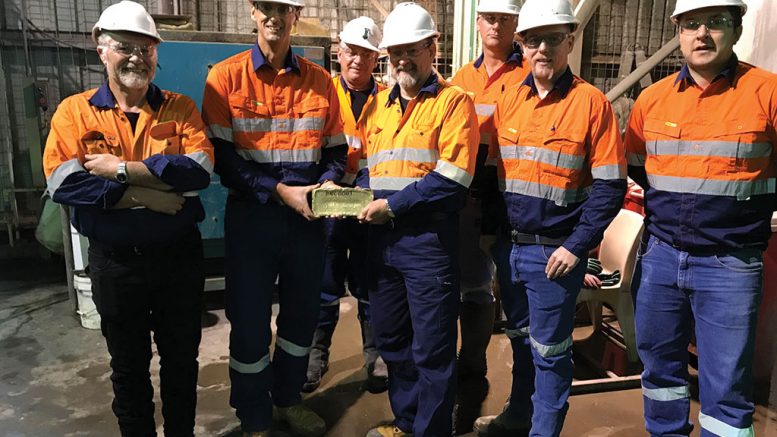 RNC Minerals staff with the first gold doré bar poured in June 2019 at the Higginsville gold mill, 60 km south of the Beta Hunt gold mine in Western Australia. Credit: RNC Minerals.[/caption] TORONTO – RNC Minerals is making its status as a gold-focused company official, announcing the acquisition of a third gold project in Australia, and proposing a name change to Karora Resources. RNC already operates the Beta Hunt and Higginsville gold operations in Western Australia, and holds a 28% stake in the advanced Dumont nickel project in Quebec. Now, it's signed an agreement to purchase the Spargos Reward gold project, which lies 65 km north of its 1.4-million t/y Higginsville processing plant – within trucking distance. RNC is paying Perth-based Corona Resources A$25,000 upfront for a three-month exclusive period in which to complete due diligence on Spargos Reward. After that, RNC will pay A$4 million in cash or shares or a combination of both. RNC would be required to spend at least A$2.5 million on exploration and development during a two-year period after the deal is closed, and pay the vendor A$1.5 million in shares on the start of production, plus A$1 million in shares if another 165,000 oz. gold in indicated resources is outlined at the project. "The potential addition of a near term high-grade open pit gold project such as Spargos Reward, which is located close to our Higginsville treatment plant, is a very compelling opportunity,” said RNC CEO Paul Andre Huet in a release. “In our view, Spargos Reward has the potential to be fast tracked into our growing production pipeline and generate substantial cash flow with little risk to RNC and its shareholders." Huet added that the historical grades at Spargos Reward exceed those at both of RNC's existing operations and could provide a higher margin source of feed to the company's Higginsville treatment facility. “This should also allow us to be more selective in our mining at Beta Hunt and Higginsville,” he said. The Spargos Reward project has a resource of 785,800 tonnes grading 4.4 g/t gold for 112,000 oz. in the indicated category and 151,000 tonnes grading 4 g/t gold for 19,000 oz. in the inferred. RNC is treating the resource as historical, and has not done enough work to classify them as current resources. Current owner Corona Resources completed a positive scoping study for the project in November 2018. The historic Spargos Reward mine produced 105,387 tonnes at grades averaging 8.56 g/t gold in the 1930s and '40s. Exploration since the mid-1980s has extended high-grade mineralization to an area of 250 metres long by 500 metres depth, where it remains open. Between its Beta Hunt and Higginsville operations, RNC expects to produce 90-95,000 oz. gold this year, and is targeting an all-in sustaining cash cost (AISC) of US$1,000 per oz. by year end. (It produced 24,816 oz. gold at AISCs of US$1,101 per oz. in the first quarter.) Solidifying RNC's identity as a gold-focused company, the miner has proposed a name change to Karora Resources, to be voted on at the company's AGM in June. (Before September 2016, the company was known as Royal Nickel Corp.) RNC also announced it has eliminated net smelter return (NSR) royalties held by Morgan Stanley on its Higginsville gold operations. The company is paying a total of US$9 million over 30 months, with US$2.7 million paid upfront, to eliminate a 1.75% NSR on the first 10,000 oz. gold sold each year and a 2% NSR on additional ounces sold. A Western Australia state royalty of 2.5% on the property remains. For more information, visit www.rncminerals.com.