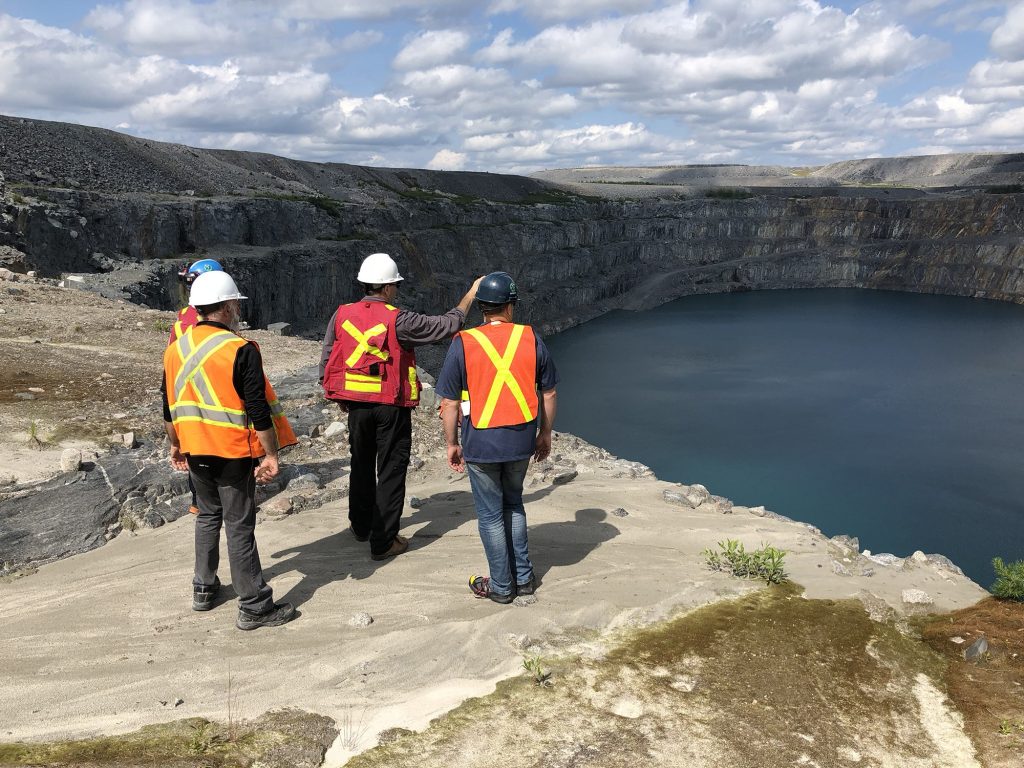 Geology team at Z87. Image courtesy of Troilus Gold.[/caption] The Z87 pit ultimately ran 350 metres deep and had a strike length of about 900 metres. Now junior explorer Troilus Gold is trying to bring that zone and others on its property back into production and has completed 36,000 metres of drilling this year. The results should have a “meaningful impact” on an updated resource estimate that the company plans to finish before the start of 2019, the company’s CEO, Justin Reid, says. Currently Troilus has a resource of 44 million indicated tonnes grading 1.27 grams gold per tonne and 0.12% copper for 1.8 million ounces of contained gold and 117 million pounds of copper. Inferred resources add 18.7 million tonnes grading 1.03 grams gold and 0.08% copper for 622,000 ounces of gold and 34.8 million pounds of copper. Drilling this year at Z87 was designed in part to expand the underground portion of the resource down dip and along strike below the historic pit. Results released today demonstrate that the mineralization extends an additional 180 metres below the lowest level of the current inferred resource estimate. Highlights include 1.88 grams gold per tonne and 0.1% copper over 52 metres from 675 metres downhole in Z87-018; 1.58 grams gold and 0.1% copper over 67 metres starting from a depth of 832 metres, including 2 metres of 10.03 grams gold in hole Z87-044; and 1.44 grams gold and 0.13% copper over 81 metres from 689 metres downhole in hole Z87-035. “We believe this drilling at Z87 may be the most significant to date,” Reid stated in a news release. “We have shown the extension of Z87 significantly below our current mineral resource estimates.” The company notes that two smaller scale historic open pits, J4 and J5, 200 metres and 1 km northeast of Z87, have the same mineralization and geology as Z87. Both J4 and J5 remain open at depth and along strike. In addition, the company is undertaking regional exploration focusing on the extension and identification of mineralization to the northeast and southwest of the existing resource, while structural and geophysical studies are being combined with regional mapping to outline potential drill targets that should be included in Troilus Gold’s 2019 exploration program. The Southwest Zone is one area of significant interest. The zone, about 3.5 km southwest of Z87, is located along the margin of the Troilus Diorite and surrounding volcanics. Historic intercepts from that zone included 36 metres of 1.23 grams gold and 18 metres of 1.06 grams gold. The 4,700-hectare Troilus is northeast of the Val-d’Or district within the Frotet-Evans Greenstone Belt. Story courtesy of The Northern Miner. www.northernminer.com.